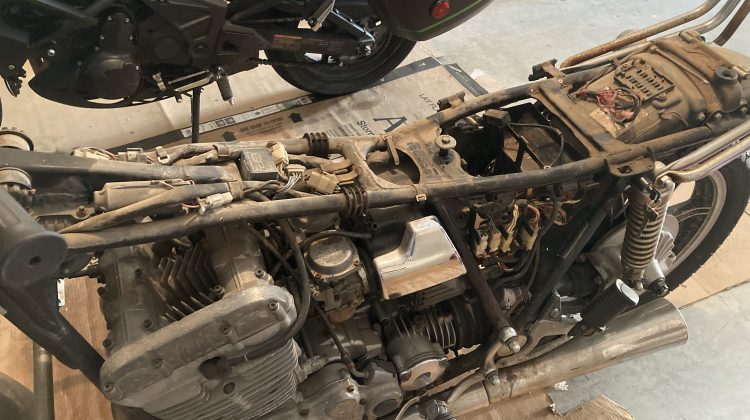 As I explained in part 1, the purpose of this build is to enter the Reliability Rally next May. The Rally is built along the idea of the participants purchasing a motorcycle for $1000 or less, getting it road worthy, and then taking on the various challenges involved in the rally. Points are accumulated for such things as acceleration, fuel milage, and actually riding TO the event. Additional points can be earned by having the lowest purchase price and based on a popularity vote of the participants. Points are subtracted for breaking down during the approximately 400 miles we will ride at the rally. I’ve got the purchase price covered as this was actually a FREE bike, given to me by Don Payne (Indiana), who said I could have it for the same price HE paid for it several years ago. But remember what they say about something that is free….

The other purpose is to show that you don’t need a high dollar rig with all the bells and whistles to go Sport Touring. I’ll be getting more into that in Part 2 of the Journey. But for now, I’ll bring you up to date on the rebuild of a 42-year-old bike that has been sitting since 1999. 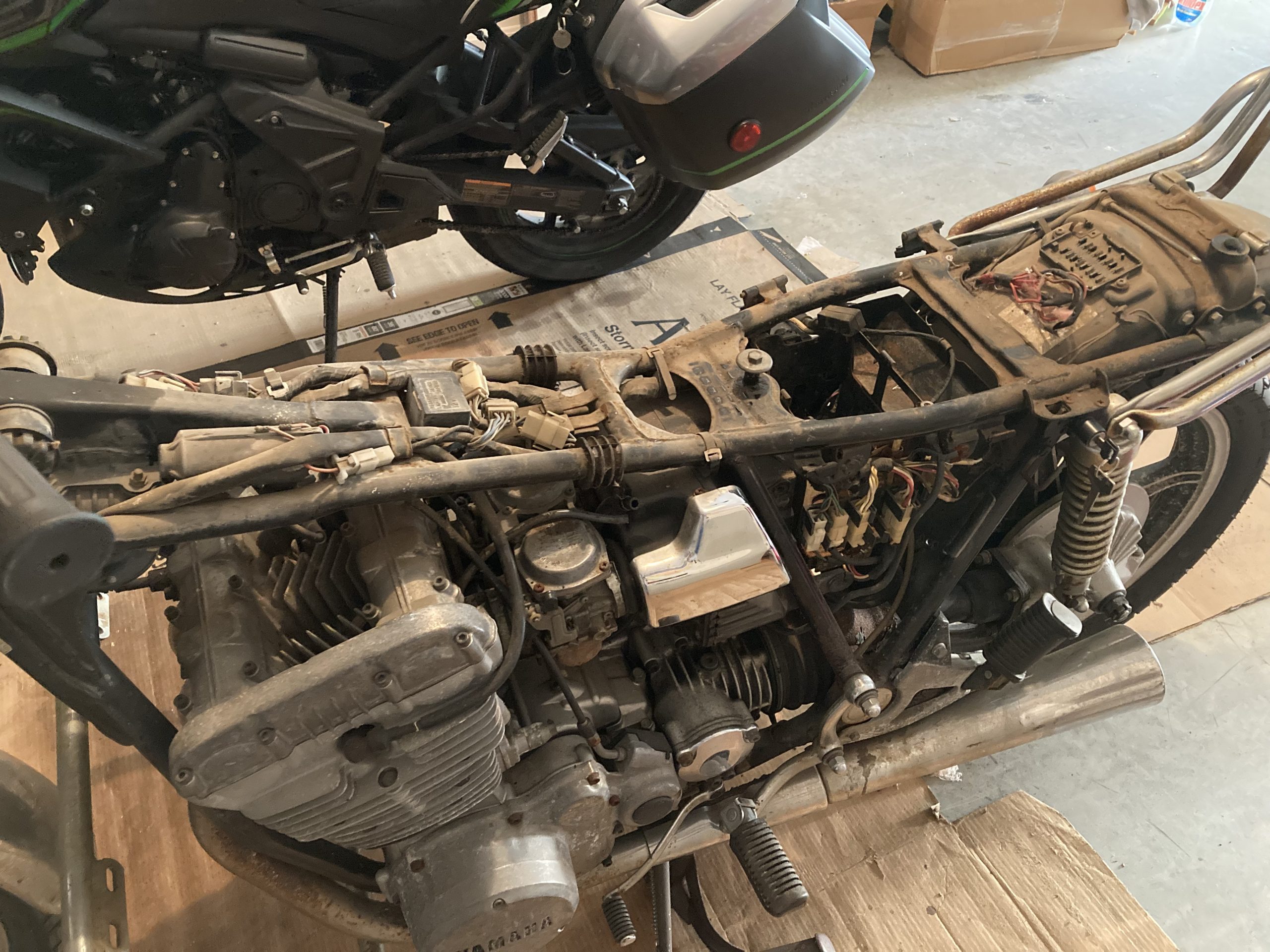 The 1st step in the process was to take off the seat and the gas tank. 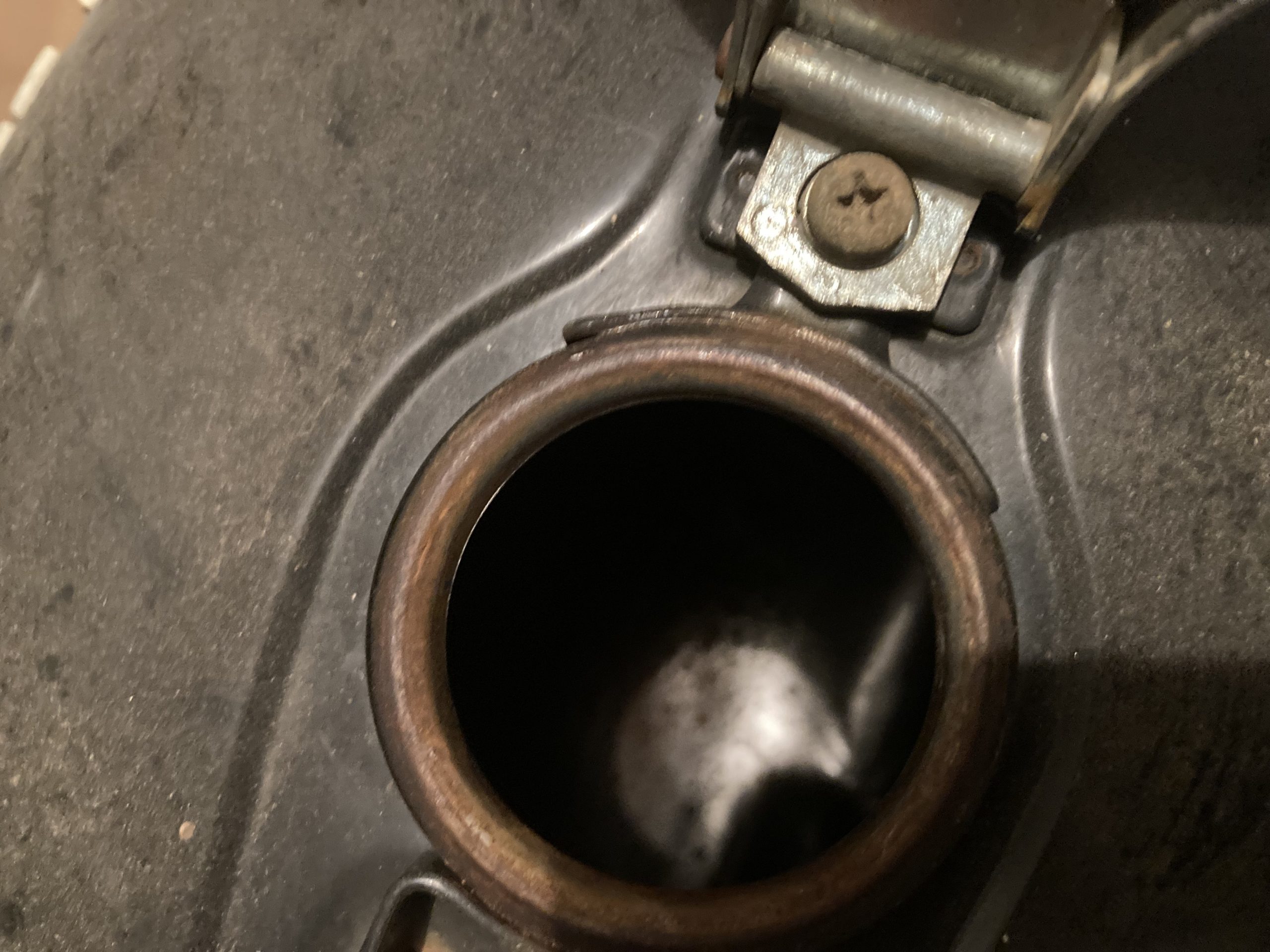 The gas tank is pretty clean and looks like it won’t need much attention. 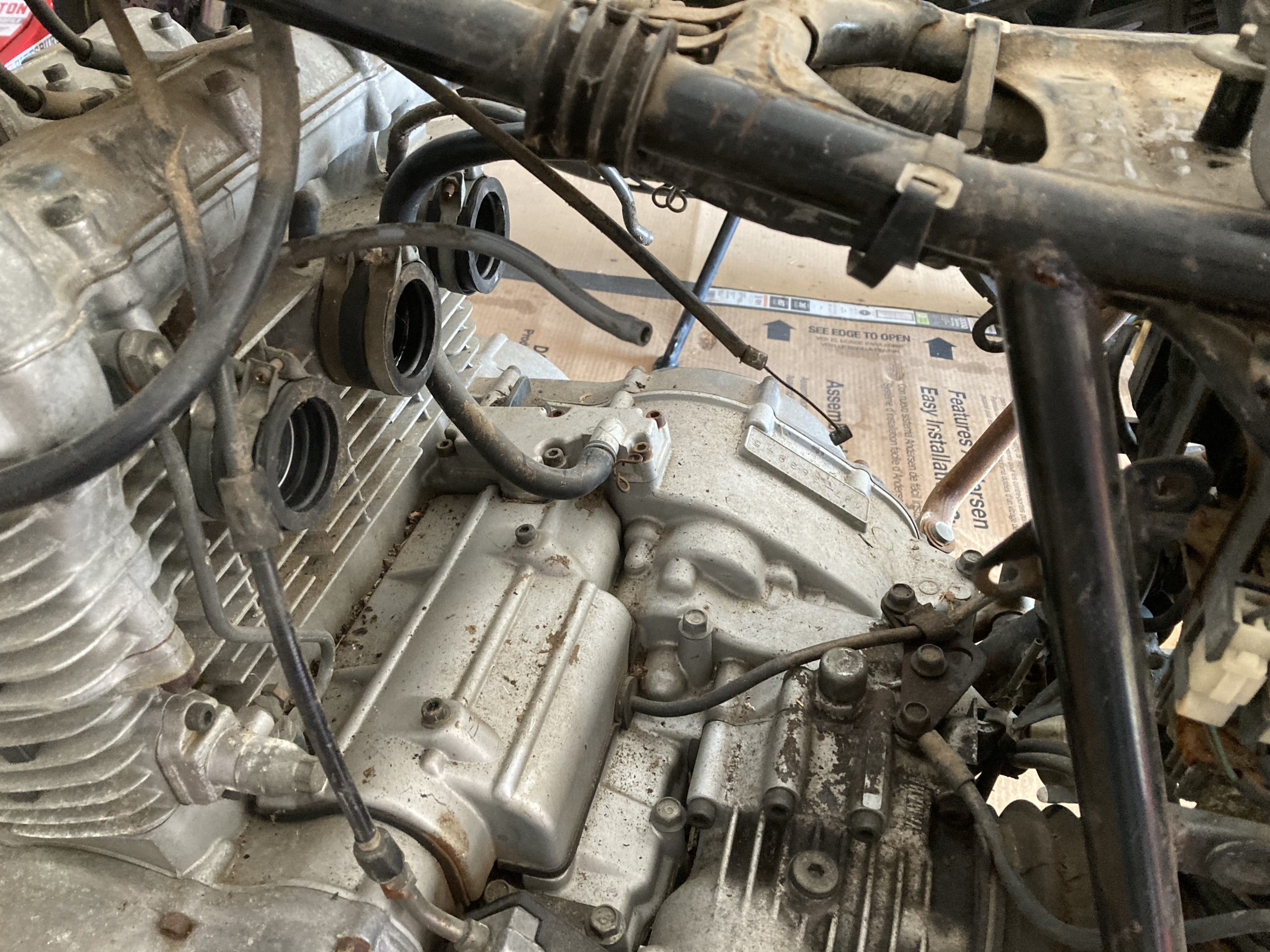 Next, I removed the airbox and carbs. The carbs have been sent out to be clean and rebuilt by Glen Maxwell (MSTA member in Indiana). 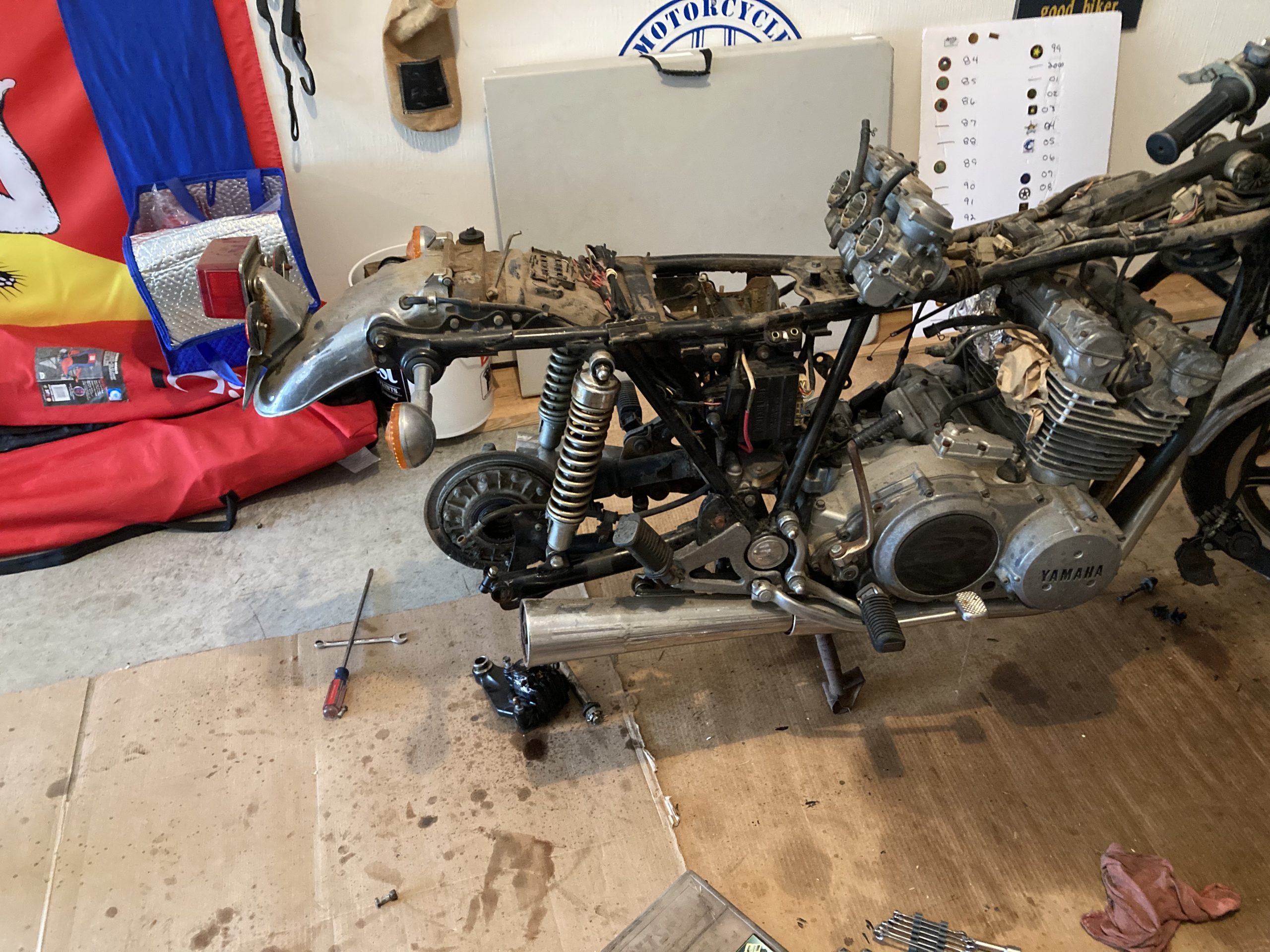 Then I removed the rear wheel. The rotor was scored from the old pads so I sourced a replacement on Ebay. 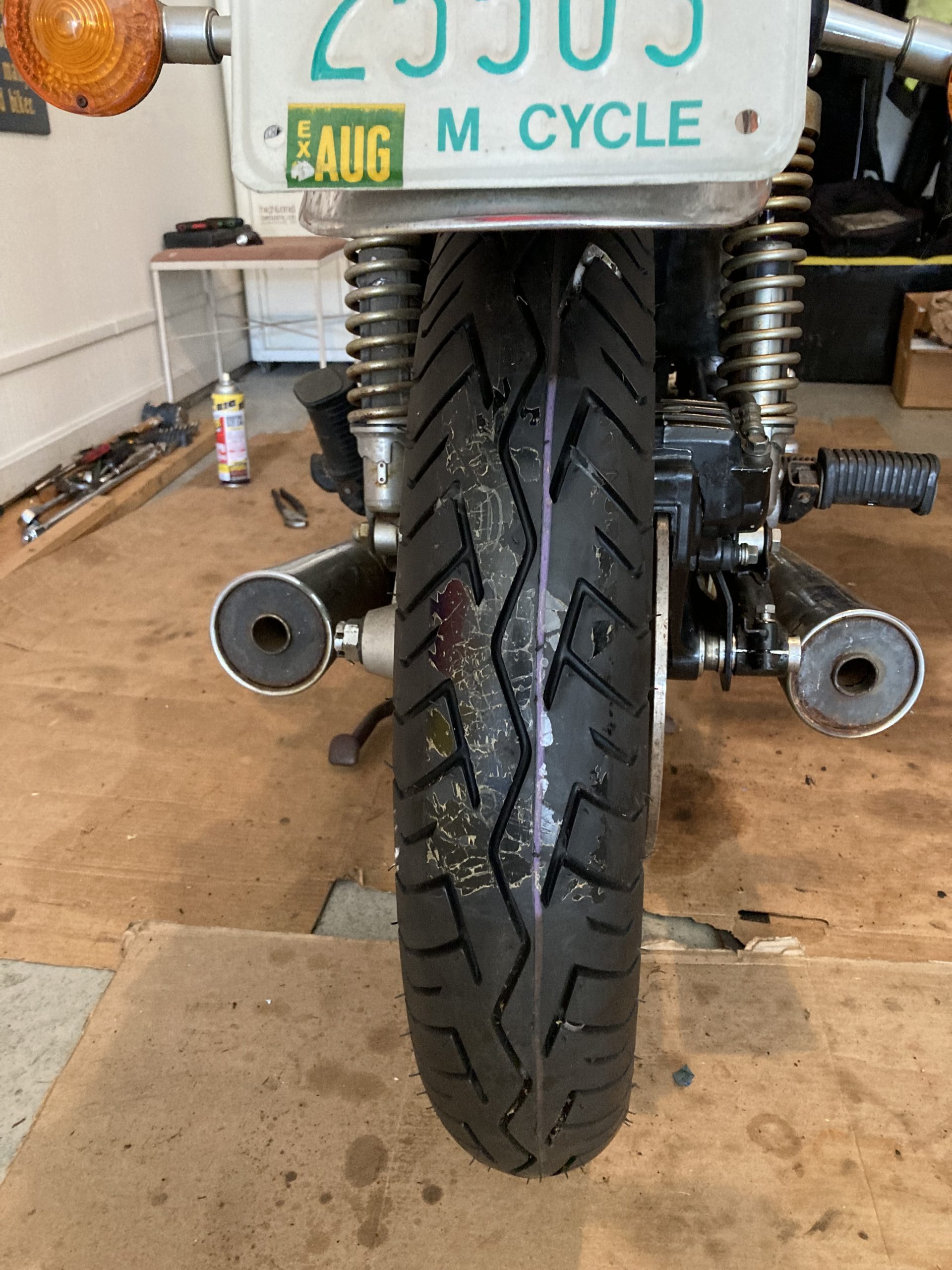 Don Payne had included a new unmounted tire in this transaction, so while I had the wheel off I fitted it. 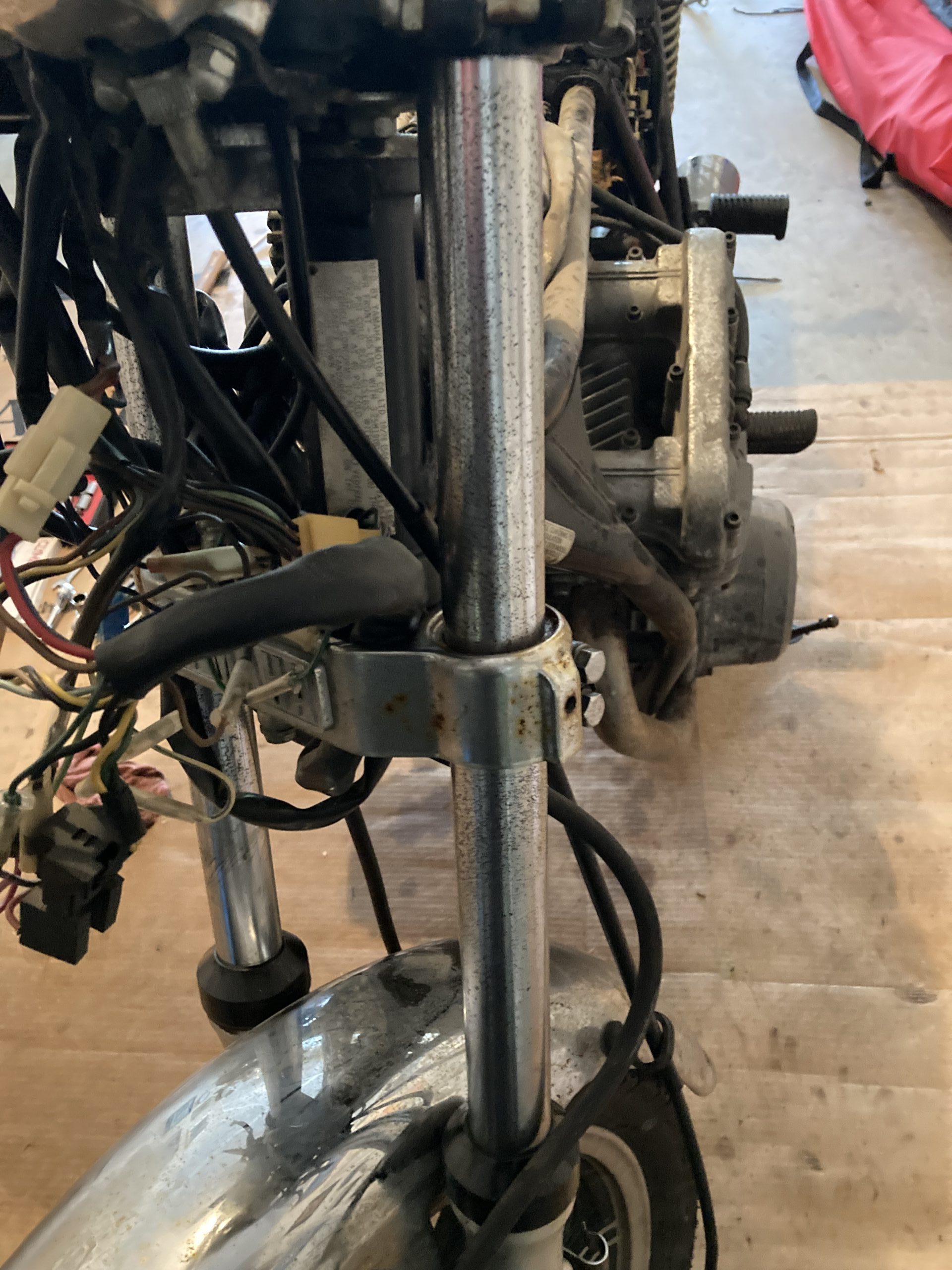 The forks were pretty rusty looking and Don had also supplied a replacement set. However, I used some SOS pads on them, and also was able to secure some really nice headlight mounting brackets from an Ebay store, and they look much better now. I didn’t use the forks that Don gave me because they were for a different model and the brake calipers mounted up differently. 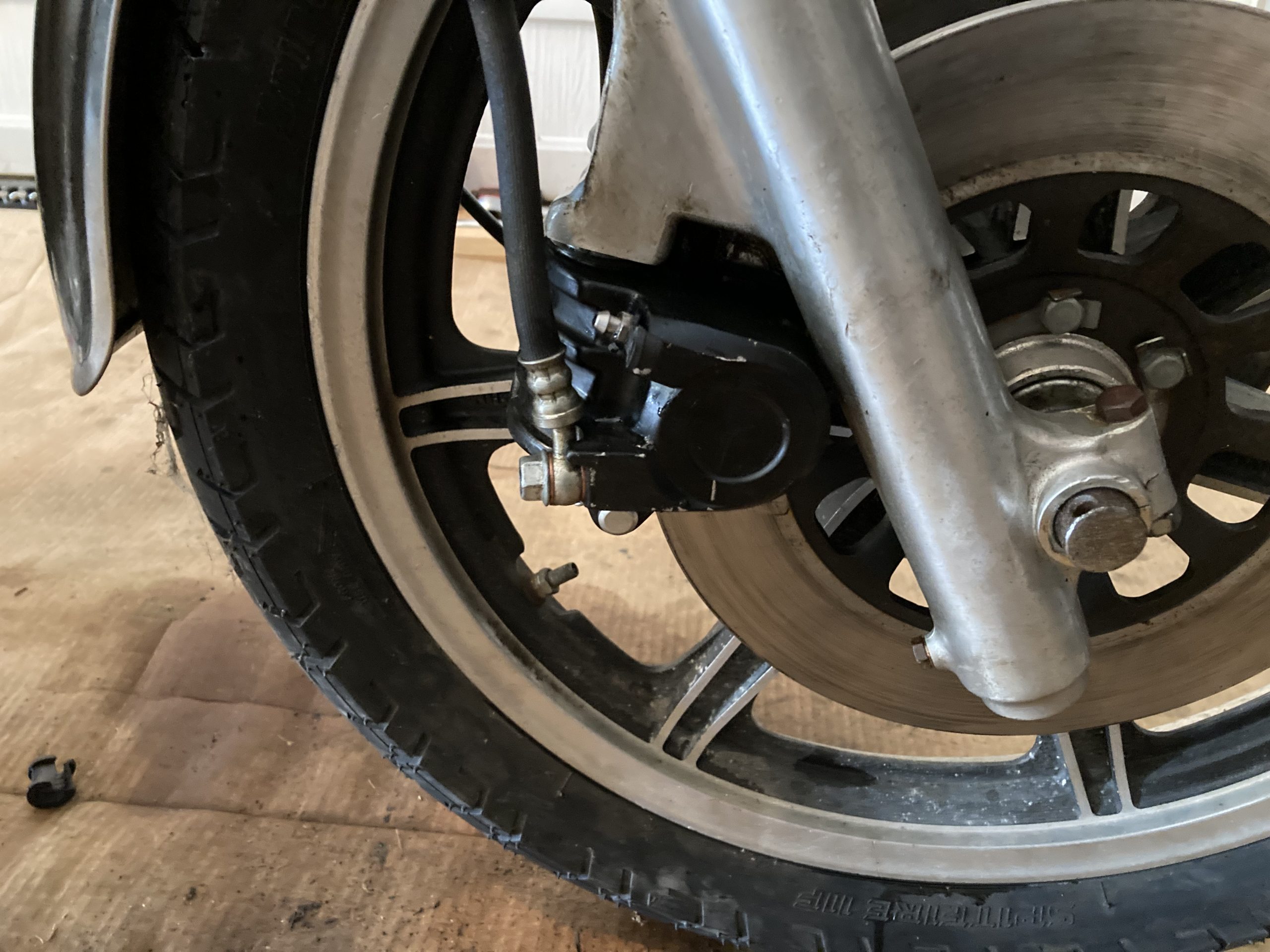 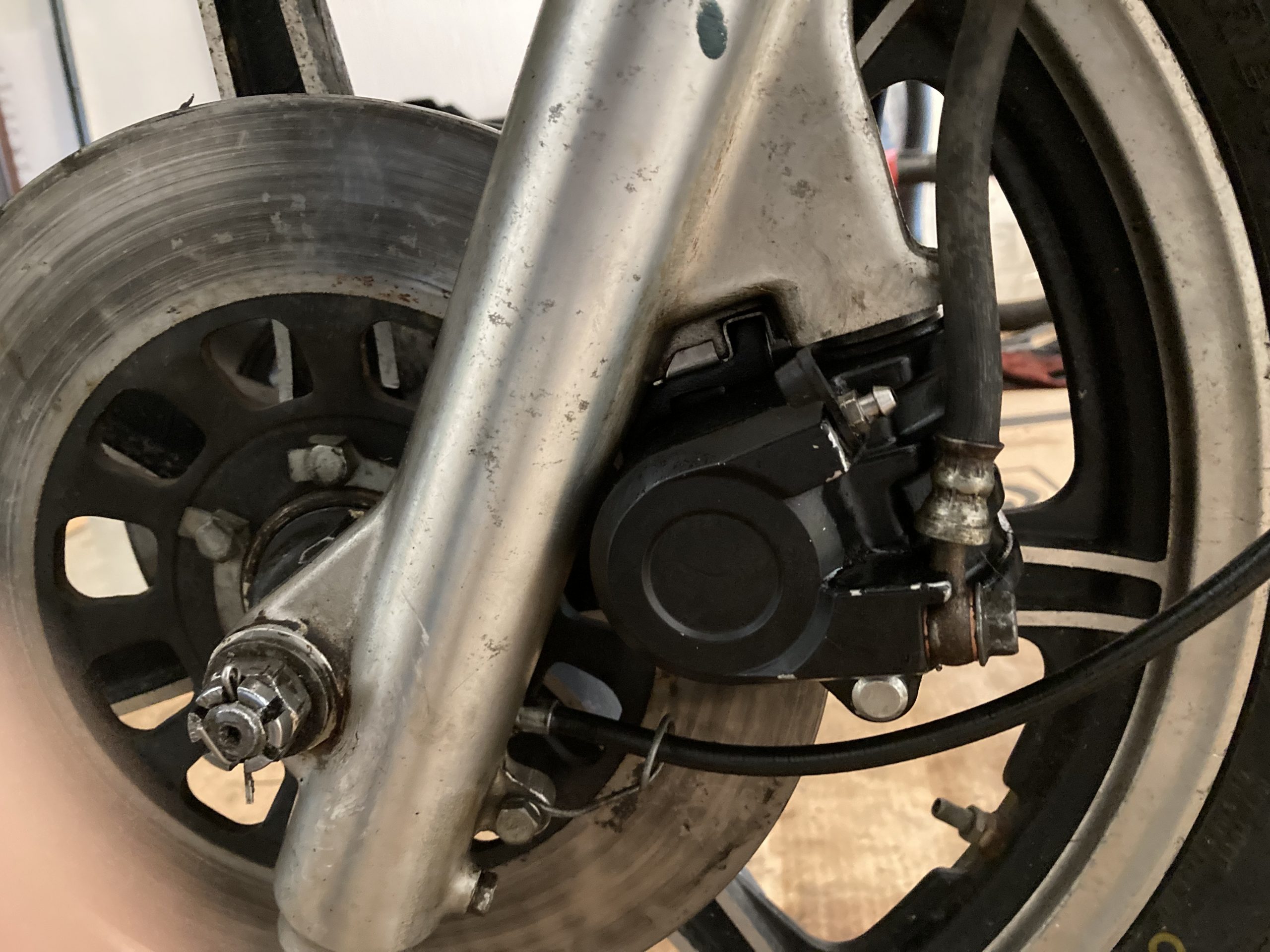 I next ordered rebuild kits for the front calipers and got them working fine. New brake pads, seals, and clips too. 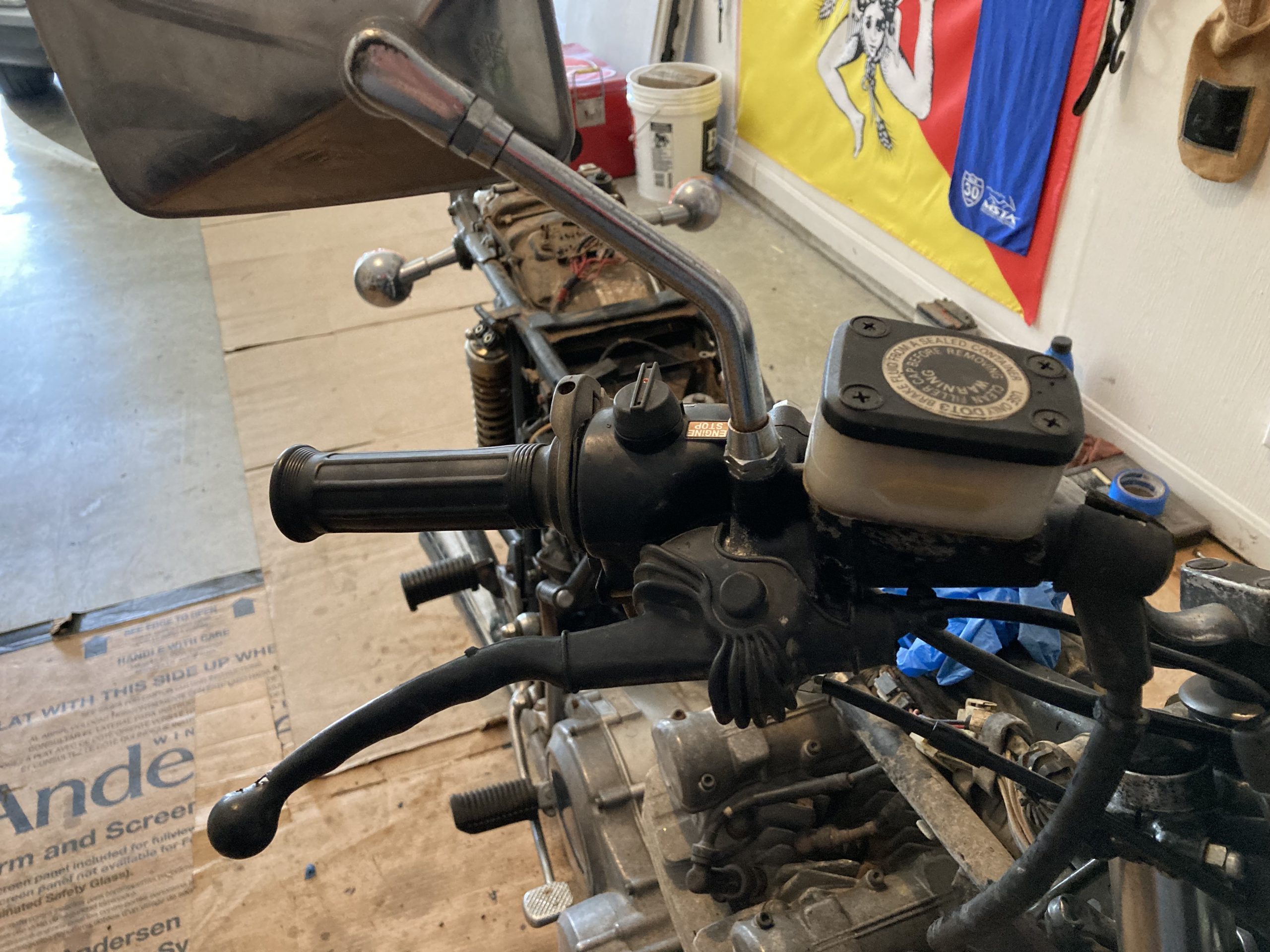 The master cyl. it came with was a total disaster, so I got a replacement off of Ebay. I am trying to use as many original OEM parts as can on this build, as I think it part of staying in the “spirit” of the rules for the Reliability Challenge. 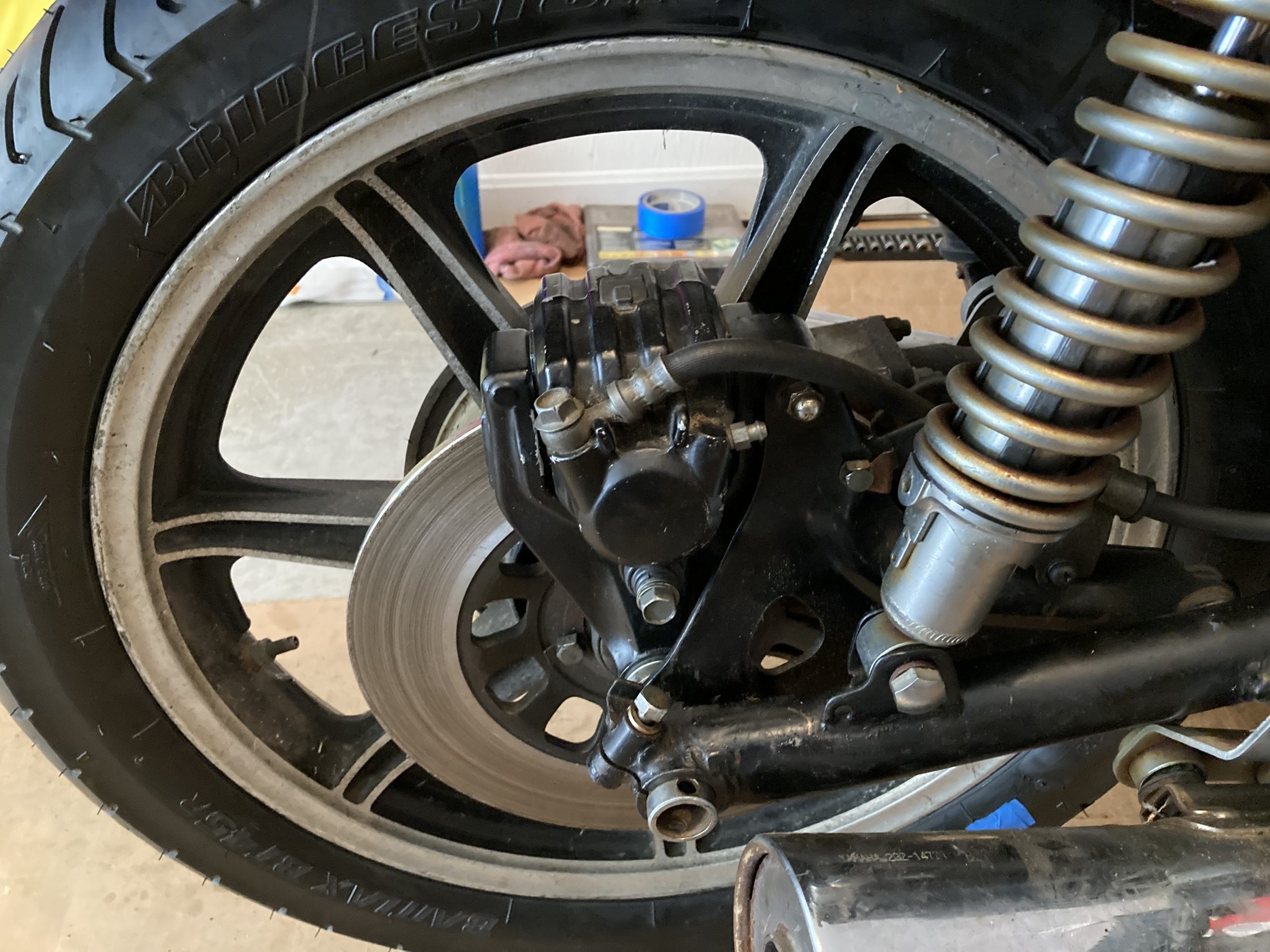 The rear master cyl was no better than the front and the rear caliper was frozen. I bought rebuild kits for both, but ended up getting a used rear caliper/brakehose/rear master cyl. off of Ebay for the princely sum of $49.99, so I just replaced it all. Added a new set of pads too.

So now I’ve got all the brakes rebuilt/replaced, a new rear tire, the forks cleaned and replaced, and the carbs off and getting rebuilt. I’ve spent just under $350 getting all of the parts I needed and spent around 10 hours in the garage and shop working on the bike. I still need to change the oil and rear drive fluid, replace the spark plugs, get a new battery, and refit the carbs when I get them back. I’ll probably end up replacing the front tire too, and I think I’ll go with pods instead of refitting the air box just to keep it easy. After that it will be getting the headlight fitted and coming up with some front turn signals. Oh, and I need to either lube or replace all the cables too. However, part of that money I’ve already spent was to get a complete set of used cables and hoses, all of which are in very good condition. So, I shouldn’t have any additional expenses there. I’ve also got to recover the seat as part of it was ripped.

I feel that I’ve made quite a bit of progress this past month but there is still plenty to go. I think that in the end it will be a very reliable and CHEAP bike. Just what the doctor ordered.