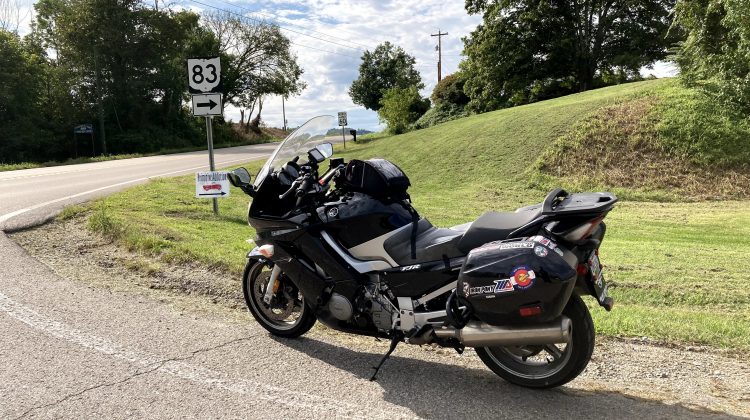 When my plans to visit the National Motorcycle Museum over Labor Day got put on hold by my bank account, I devised three northeast Ohio rides for that weekend — and they didn’t disappoint.

Though one of the routes wasn’t as twisty as the others, two of them allowed me to enjoy some fine Ohio backroads I hadn’t ridden yet in 2021. The other allowed me to explore a part of Ohio I hadn’t visited before and discover an area that I need to spend more time getting to know.

The route I chose for Saturday — Ohio State Route 83 — is one I used to ride a lot when I lived in Brunswick, Ohio, in 2010 to 2011, and is one I didn’t ride nearly enough when I lived in Columbus. I made it my first ride because — if weather didn’t cooperate the other two days — I wanted to make sure I got to ride SR 83 in dry conditions.

As I covered in another article, SR 83 is a favorite of mine, but not because it’s the twistiest or most technical road in Ohio. The part of the route from Wooster to its southern terminus at Beverly at Ohio State Route 60 offers a mix of sweepers and short twisty sections; isn’t too far from the Cleveland metro; offers several turn-around points to get back to Cleveland quickly; and has a couple neat villages along the way.

Now that I live in Cleveland, I had to pick a new return-to-home route. I chose one that looked pretty crooked on Google Maps — and that road (Ohio State Route 339) greatly exceeded my expectations.

From my home in South Euclid, I made my way to Interstate 271 on Cleveland’s east side and headed southbound to its terminus at Interstate 71, which I followed to the interchange with Ohio SR 83 (Exit 204).

Though SR 83 has a direct interchange with I-71, the fun doesn’t begin until south of Wooster. It’s about 18 miles of riding through nondescript, glaciated Ohio countryside and around the City of Wooster before the fun begins.

My rides on SR 83 usually include a stop at the BP gas station/convenience store at the corner of Dover Road (Ohio State Route 3) and Millersburg Road (SR 83). It’s a chance to fuel up and get some additional fluids in you before starting about 40-100 miles of riding fun (depending on where you decide to turn around and head home).

With my tank full of fuel and plenty of water and Powerade Zero in my system, I exited the BP parking lot onto Dover Road, maneuvered through the tight left-hand turn to get onto SR 83 and began the ride I’d been waiting all year to take.

I divide up SR 83 into sectors, with Sector 1 being the Wooster hairpin to the intersection with U.S. Route 36 near Coshocton. It’s the least technical of the three sectors. There are some sweepers with decent elevation change in the first sector until you get to the village of Millersburg.

It’s always neat to meander through central Millersburg, which boasts some well-kept, classic architecture buildings and a restaurant that I often see a lot of motorcycles parked outside of (still haven’t stopped at it yet — maybe next ride).

South of Millersburg, the turns and elevation change get more pronounced — though I didn’t get to enjoy some of my favorite corners because of slow traffic holding me up for several miles.

When the slow-pokes finally got off the road, I got up to my usual back roads pace and got to enjoy a few memorable corners — including a fun set of them that are carved into the side of a hill. You start the segment by turning to the right while descending the side of the hill, then G-out as the pavement curves hard and uphill to the left. Next there’s a blind right-hander that transitions from uphill to downhill. It’s a section of road I think belongs on a road racing course.

After enjoying the remaining sweepers, I arrived on the outskirts of Coshocton and — after passing the really neat Roscoe Village — headed south on the SR 83/U.S. 36/Ohio State Route 16 bypass to the intersection where SR 83 and SR 16 go their separate ways.

This is the start of what I call Sector 2, which features mostly sweeper corners — with a few exceptions. There’s a downhill, left-right set of corners that remind me of a couple sections of the Portimao circuit in Portugal. With foreknowledge of the corners and a reasonable corner entry speed, it’s a fun left-hander that travels down a natural ledge that leads to a hard right turn. Your suspension bottoms out just before you turn into the right-hander, so a little too much speed and you’ll quickly find yourself in the left-hand lane.

There’s also a technical score of turns a little north of New Concord. As the road ascends a hill, it switches back a couple times with several tight, uphill curves that are a blast to lean into.

The terrain flattens out a little after the twisty bits as the route approaches New Concord. SR 83 runs to the west of the village and the Muskingum College campus, intersecting with U.S. Route 22 and, a mile or two later, Interstate 70. After crossing under the I-70 right of way, you’re greeted with a fun set of sweepers that gradually work their way downhill — leading to a very tight, 90-degree left-hander that had a big drop in it mid-corner. I have no idea how there isn’t a semi rolled over every time I ride through that corner.

From there to the route’s southern terminus, it’s a mix of tight sweepers and a few tighter corners. A short section of road where SR 83 overlaps with Ohio State Route 78 has some fun twists and turns, including one that feels sharply banked — like you’re riding around the rim of a natural bowl.

When I reached the southern end of SR 83, I rode on Ohio SR 60 east to the village of Beverly and got on Ohio SR 339. Looking back at the ride, I think I may have enjoyed riding SR 339 more than SR 83.

The east-west route connects Beverly with Ohio State Route 821 right near the Interstate 77 alignment, and I used the route to get to I-77 and start my journey back to Cleveland — and boy was it a fun ride.

The corners just keep on coming — tight sweepers or mild technical sections that do a great job balancing higher corner speeds than twisties while still keeping the motorcycle flip-flopping left-right-left-right for its entire about 14-mile length.

SR 339’s eastern terminus is just south of the Johnny Appleseed memorial — which, in a rush to get home, I completely forgot to turn left at SR 821 and check out.

As I rode back to Cuyahoga County, I felt happy that I’d finally gotten to ride SR 83 again, but was just as happy that I’d discovered SR 339. I was seriously impressed with the flow and pace of SR 339 and may work to incorporate it into my other southeast Ohio day ride routes.