Sunday has traditionally been the opening day of STAR rallies. However, over the years more and more people are coming in a day or two early and by Sunday morning we had more than half of the attendees already there. The BMWMOA had held their national rally across the state in Springfield, Missouri and it had ended just yesterday, meaning that we would have some of the people that had attended it coming in today. How many, we weren’t sure, but we were counting on a couple of dozen at the very least. We did know that there were 43 rooms at the inn that were reserved for Sunday-Thursday as part of our block. 43 rooms that hadn’t been reserved for Saturday. But as I did my early morning walk with coffee around the parking lot, I could see that a lot of people were already there. 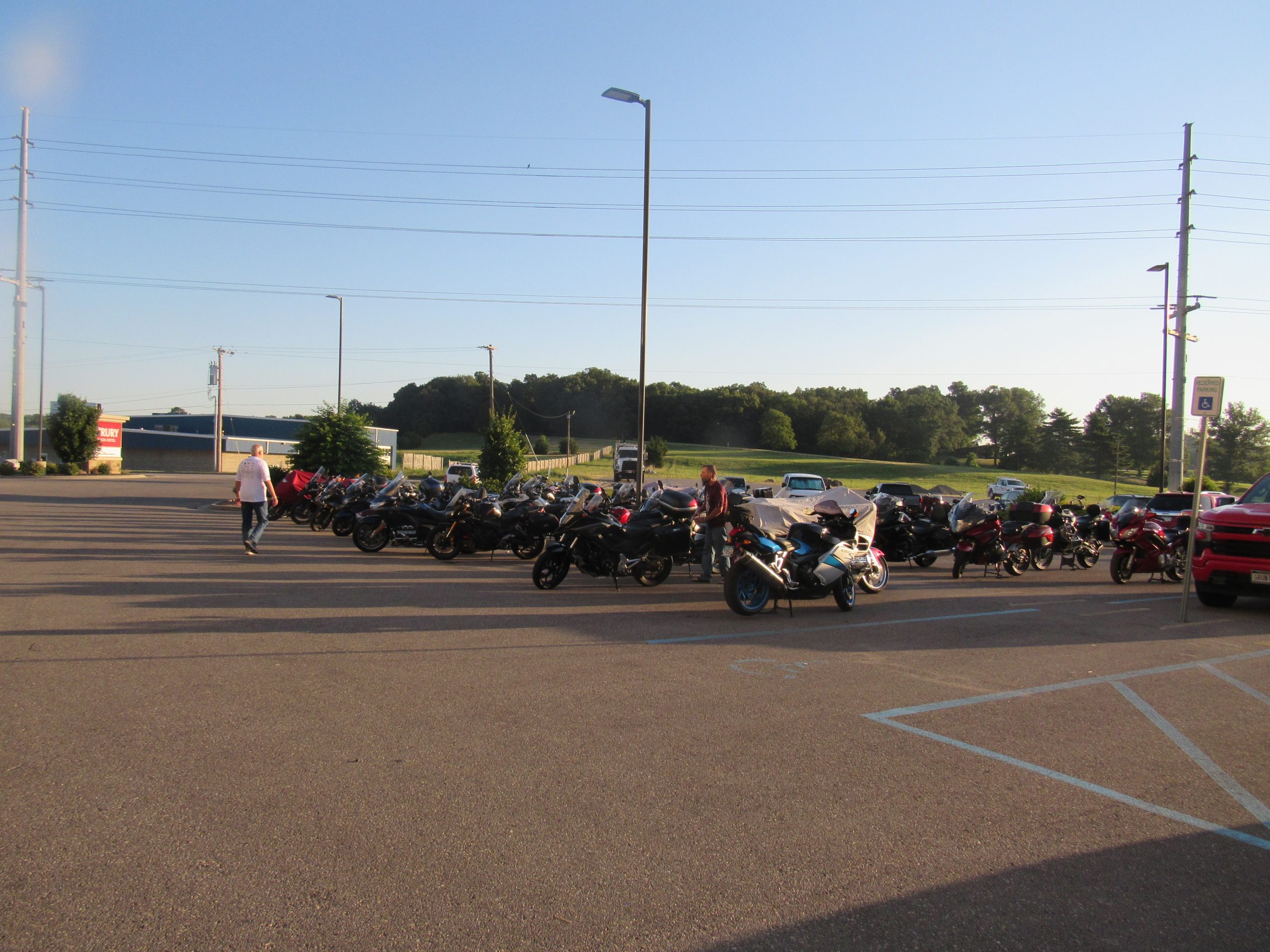 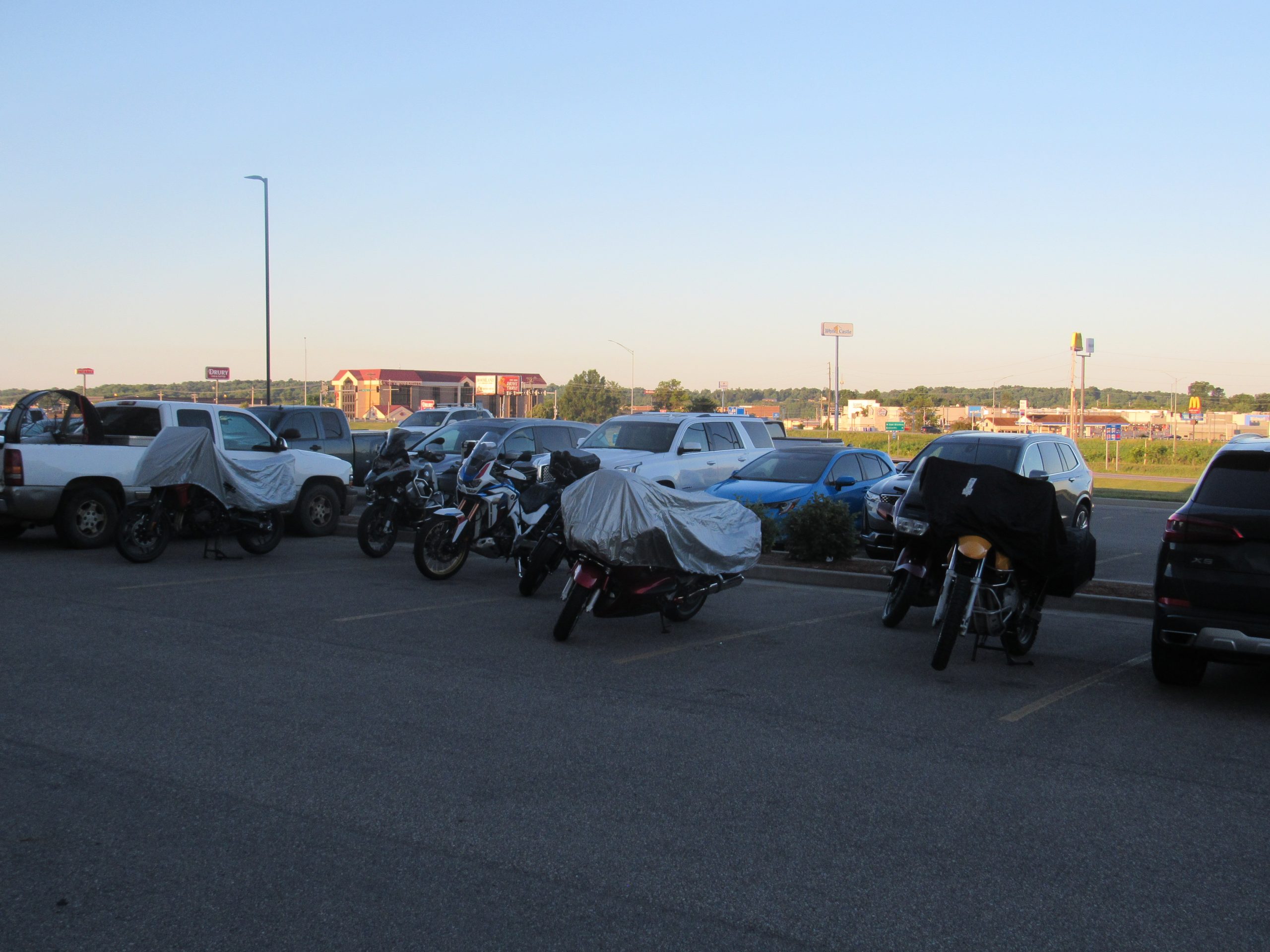 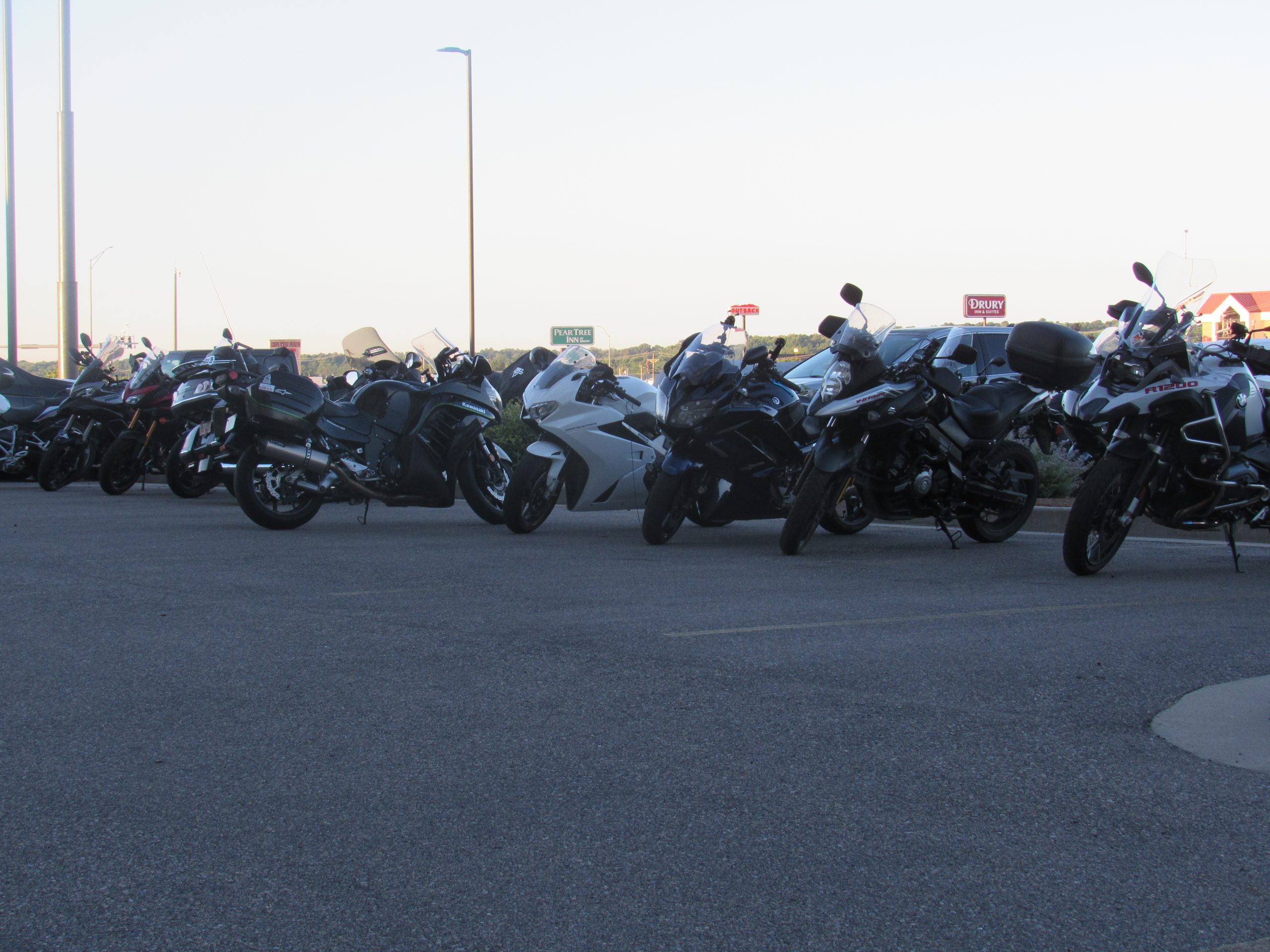 For most of the people already there, Sunday was a day to ride, and ride we did!

Meeting up with the same group that I had gone out with on Saturday, we decided to meet and leave at 7pm once again, but to do the Elephants Rock Route today. Luis Santiago had gotten there on saturday, so he joined us for the ride. 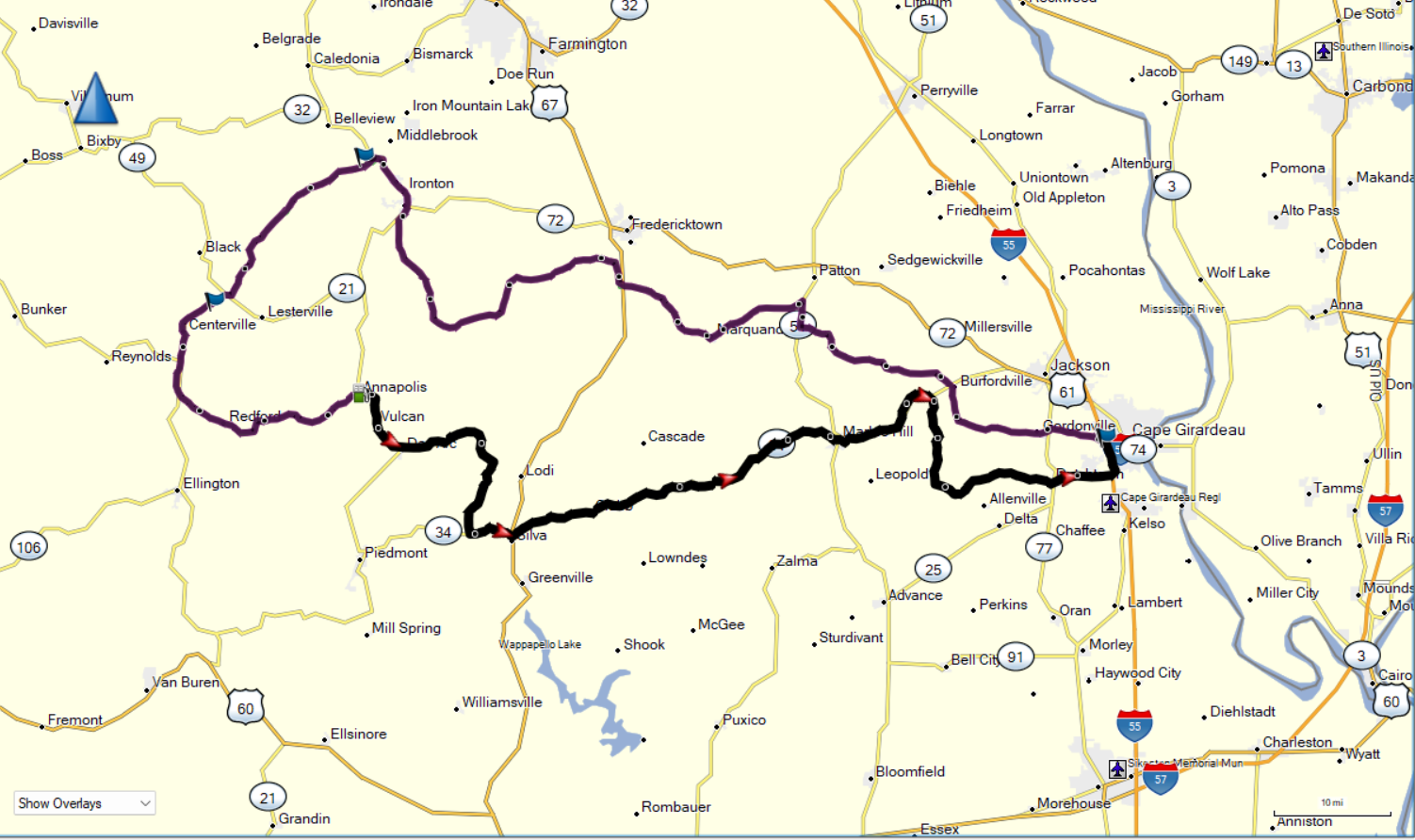 Elephant Rocks was a slightly longer route than the one we had done Saturday, and even though it headed out the same way as the Johnson Shut-in Route, and shared a few of the same roads, it was 99% new stuff for most of us. I had the chance to ride these two routes, and a couple of more during my stay, and I found this one to be my favorite. Much of the route was on the little “alphabet” roads that are designated by a letter, or a double letter, more often than they are a number. However, don’t let that fool you. They are mostly well paved, with lines down the middle, and with a 55 or higher speed limit. Great roads to make time on and to have a good time on too. Once again, we were finished with the route by noon and before the high temperatures and hot sun got uncomfortable. In fact, we started out at around 60 degrees, and it was only around 80 when we stopped. With hardly a cloud to be seen, and no wind to speak of, it was almost perfect riding weather every morning. Here we are after getting back. 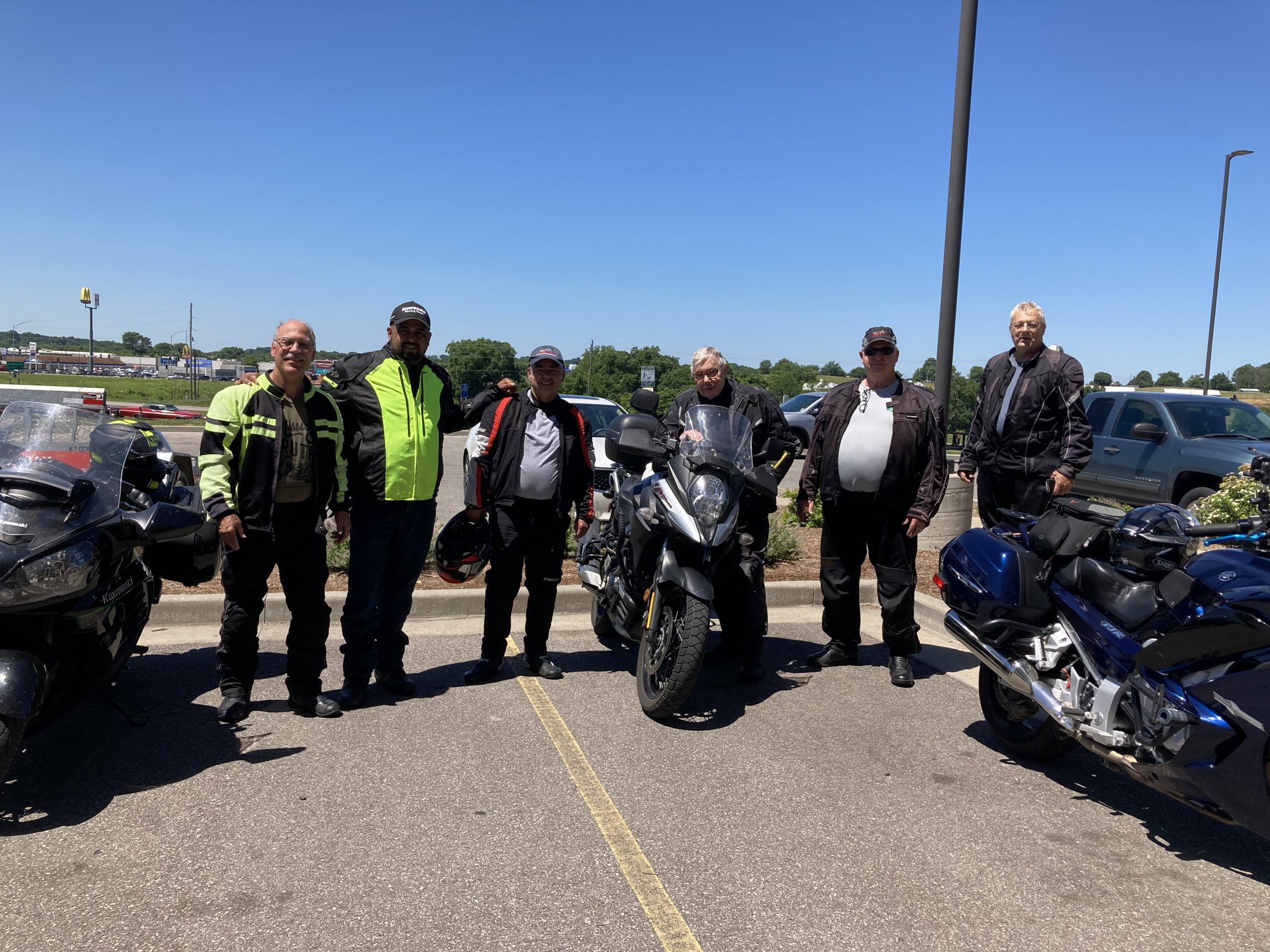 Sunday afternoon members continued to come in and the lobby and parking lot filled up with many people seeing old friends and renewing acquaintances. We had people come in from about 30 different states and many of us hadn’t seen each other for over a year. It was great to be able to get back together again like this. 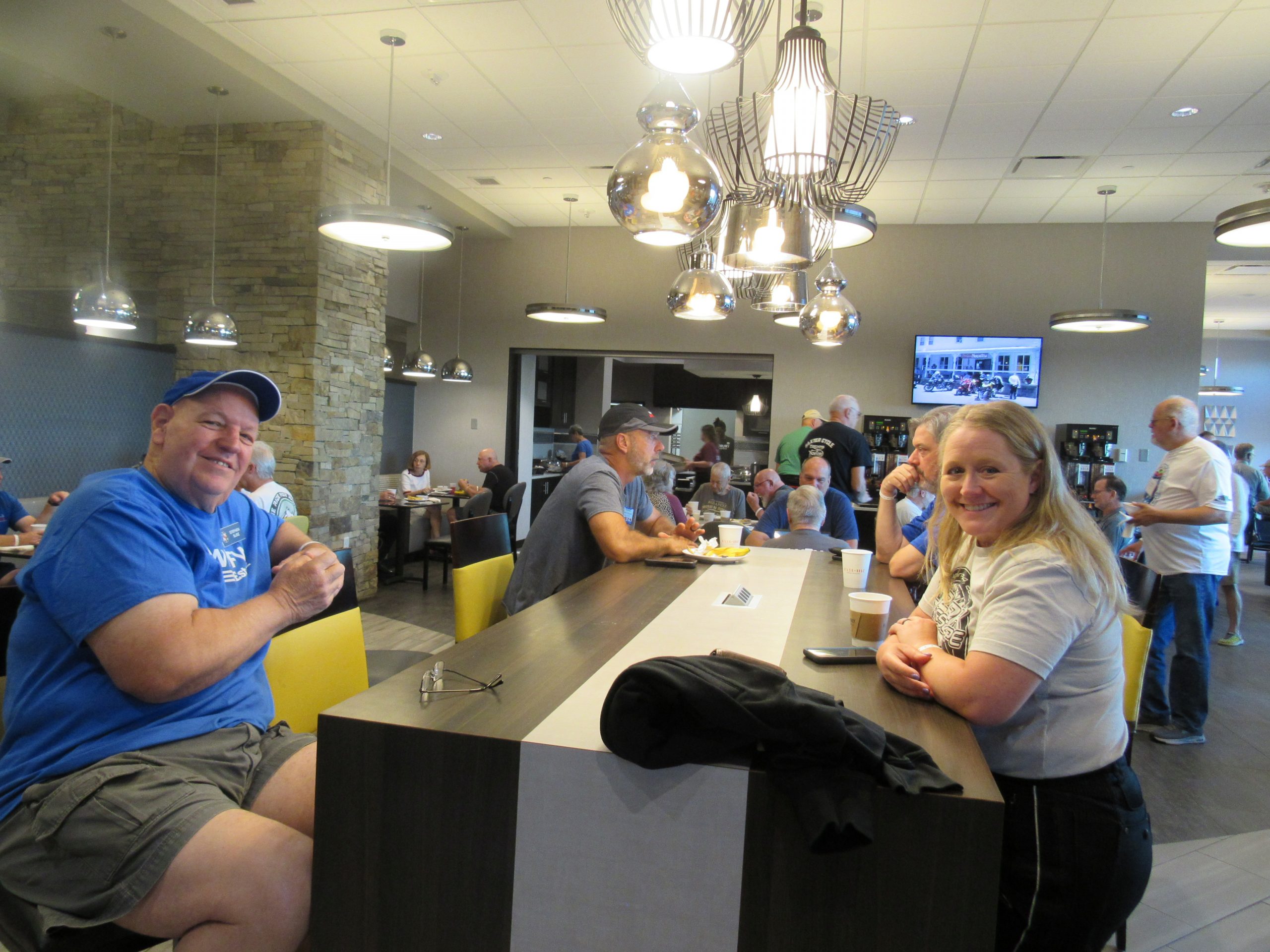 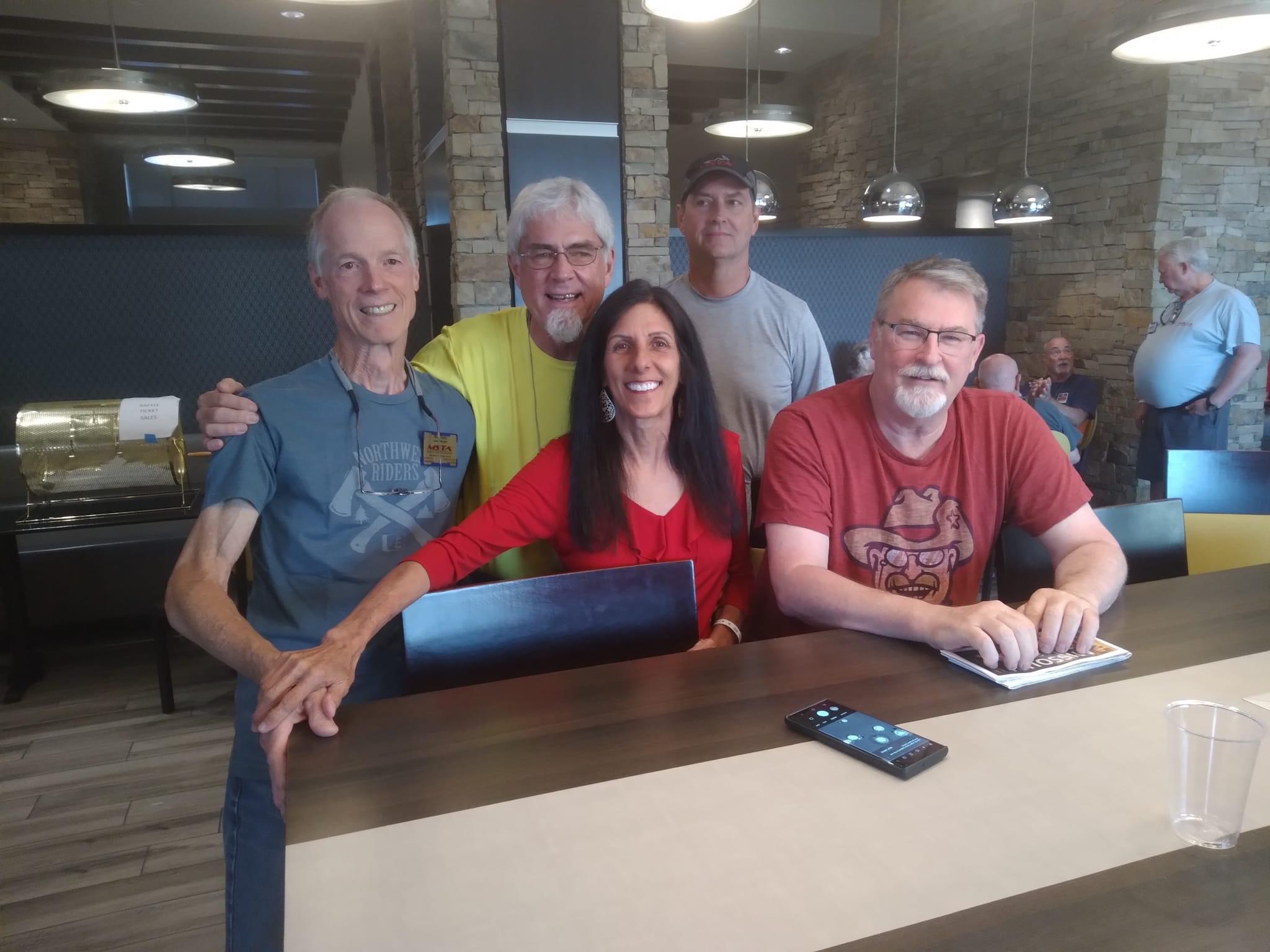 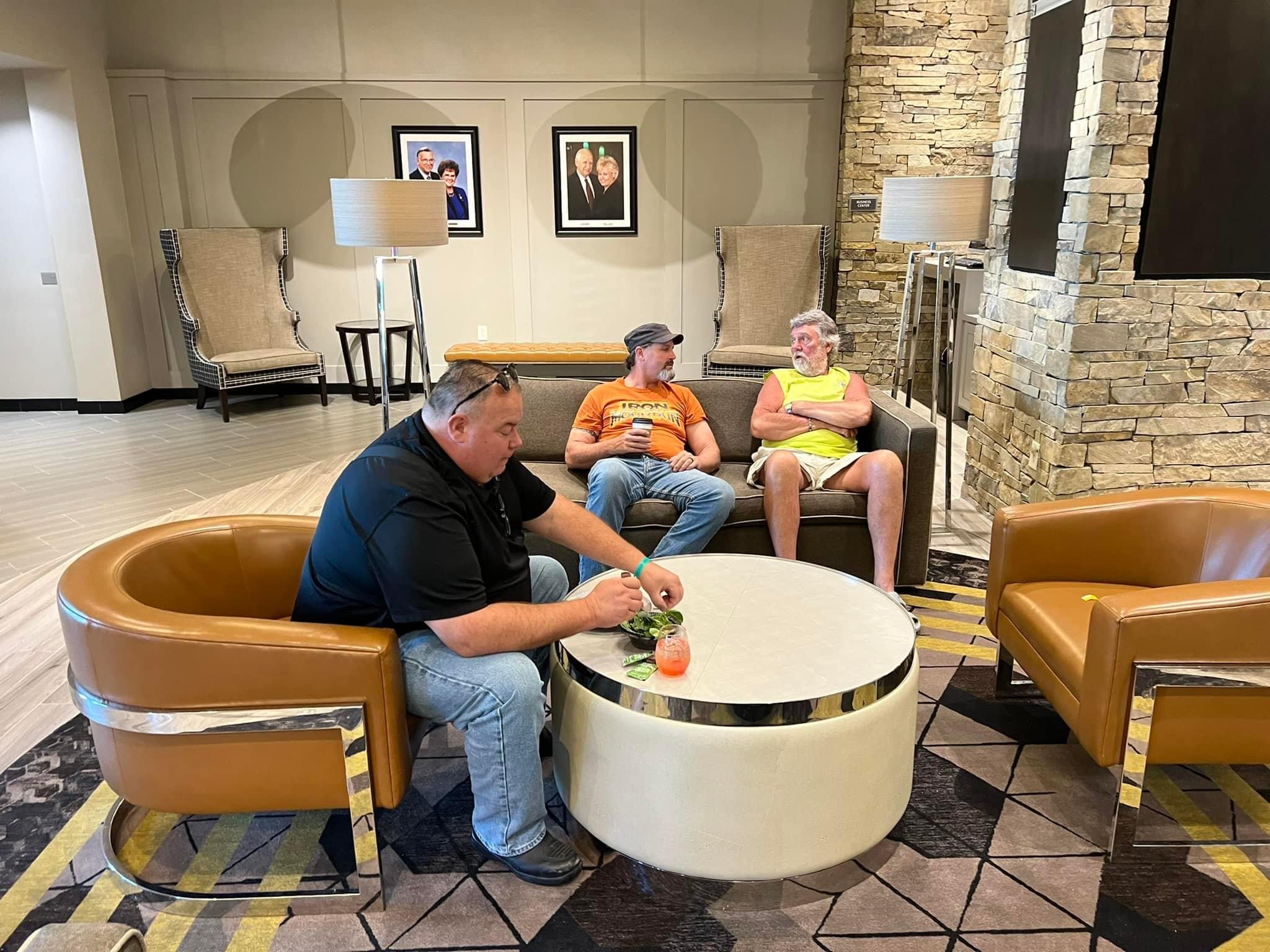 As I stated before, Sunday evening has traditionally been the official start of our STAR rallies, and we kick it off with a welcome ceremony that everyone is invited to. Many times, we have representatives from the host hotel, a local dealer, and the local government there to say a few words. We try to let all the 1st time attendees know what to expect, let everyone know where to get route information, and answer any general questions people may have. it is usually over and one with in 30-45 minutes. 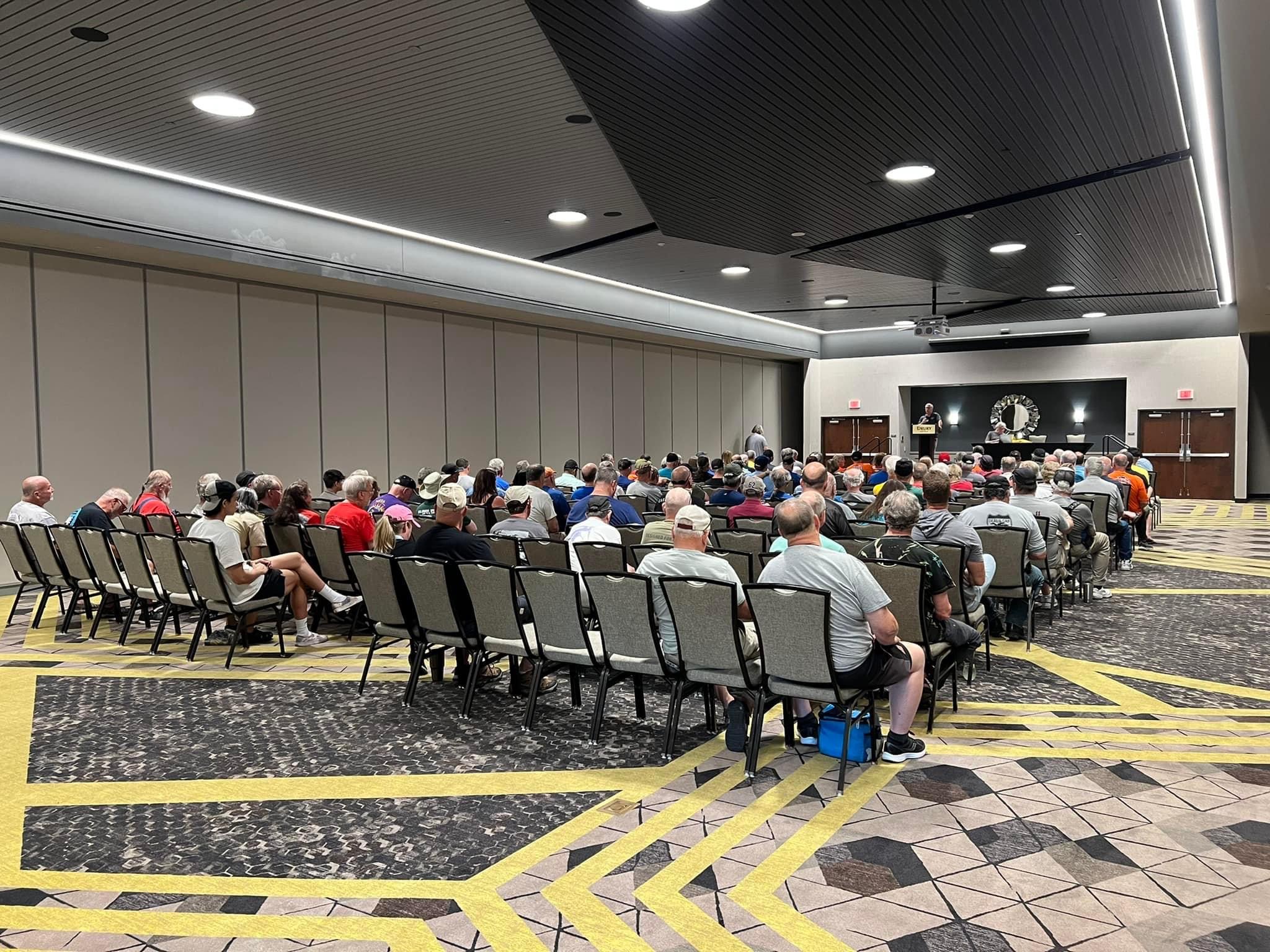 Afterwards, people generally breakup into small groups to talk and socialize the night away.

Monday brought more of the same, riding, socializing, eating, and information. Luis, Chris Parker, and I decided to do a shorter route this day. We did the Little Roads Route, that was only about 130 miles. 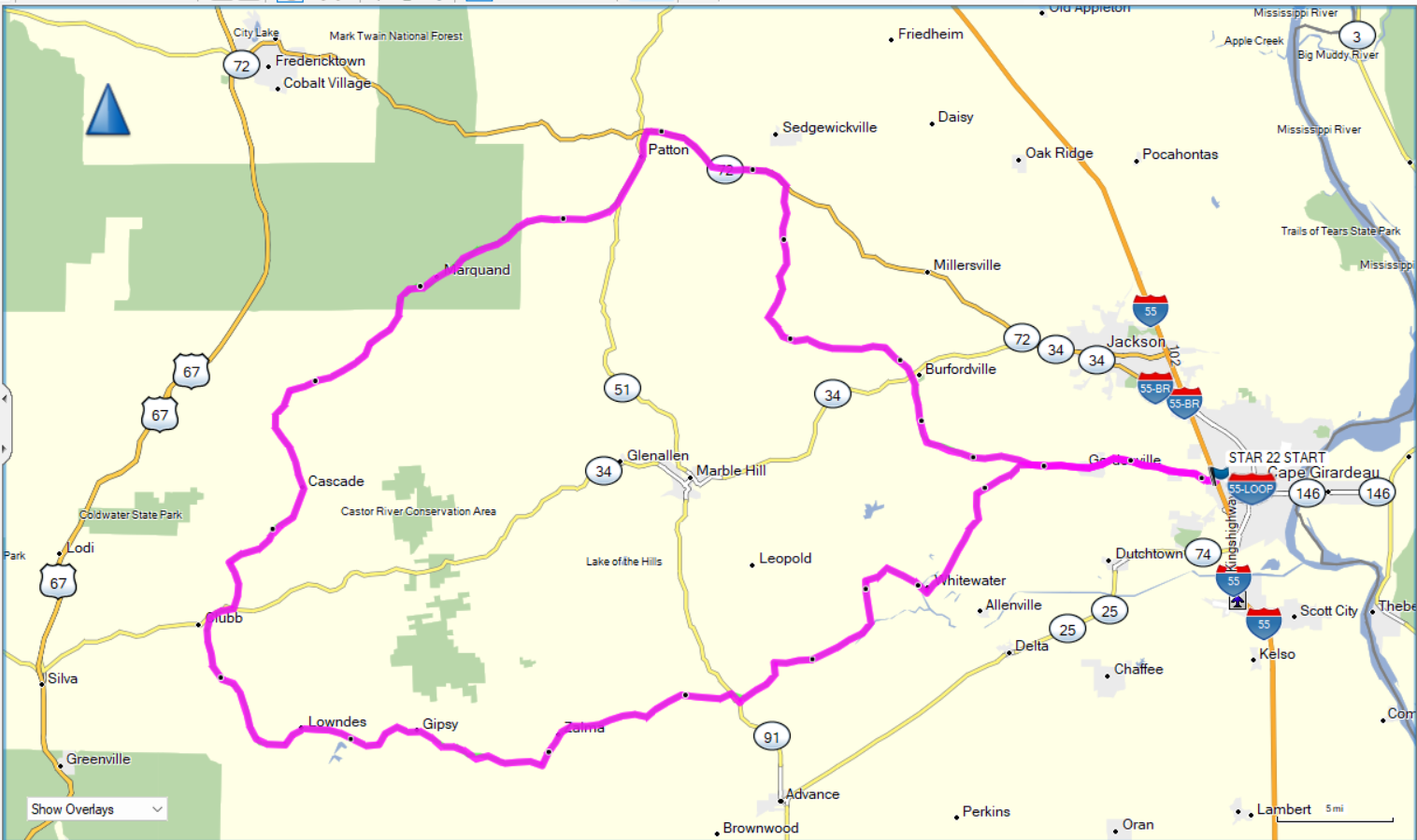 Chris had ridden 650 miles from South Carolina on Sunday, so he wasn’t interested in doing a long ride today. A few notes on Chris, he is the editor of both our club magazine the STAReview, and the magazine of the BMW Riders Association, On The Level. As the editor of the OTL he had been invited to attend the press release of the new BMW K160GT in California just a week or so prior to STAR. In addition, BMW had loaned him one of the press release bikes to ride back across the country to his home in South Carolina. He had then turned around after that trip and done a straight shot to STAR on Sunday on the same bike! No wonder he wanted to do a shorter ride today. About 2/3rds of the way through the Small Roads route we came to Moore’s Store and took a short break. 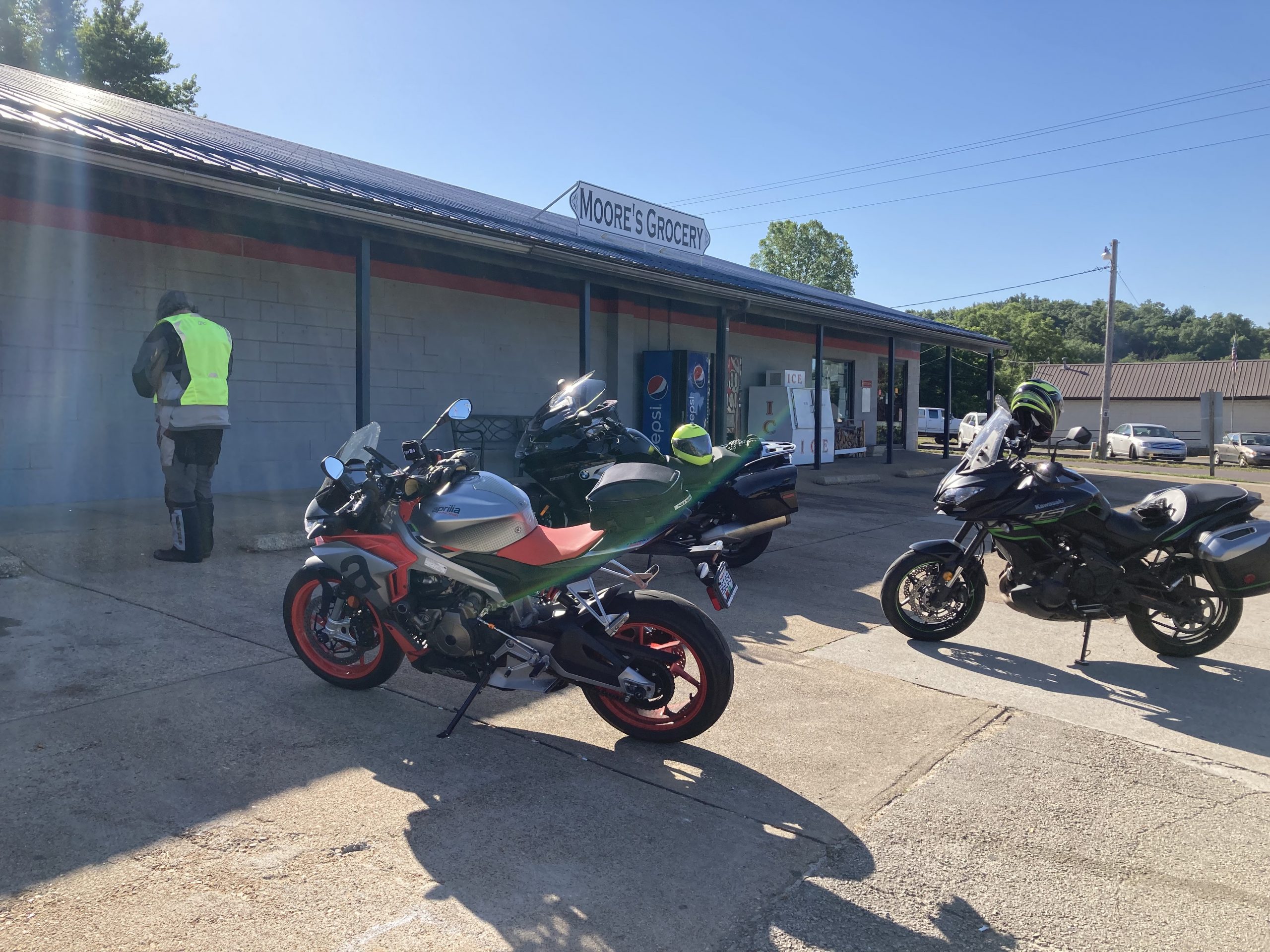 There we ran into a local gentleman enjoying his early morning in the sun and had a nice conversation about motorcycles (he used to have one), the weather, Missouri, and life in general. I just love meeting and talking with locals when I’m out riding in new areas. It really gives me a taste for the area and the people.

I hadn’t been sleeping much over the last few days, and I had a busy evening ahead of me, so when we got back and after lunch, I took a nice 2-hour nap. Feeling refreshed and ready for almost anything after a nap and a shower, I headed downstairs to the lobby to socialize and finish up some preparations for the evening. Monday evening, we hold our annual Members Meeting. There we give a statement on the general health of the club, talk about our membership numbers, give a financial report, and also announce where the next years STAR will be held, and when. We also give away some door prizes and awards to the membership. We also do a question-and-answer period at the end of that. 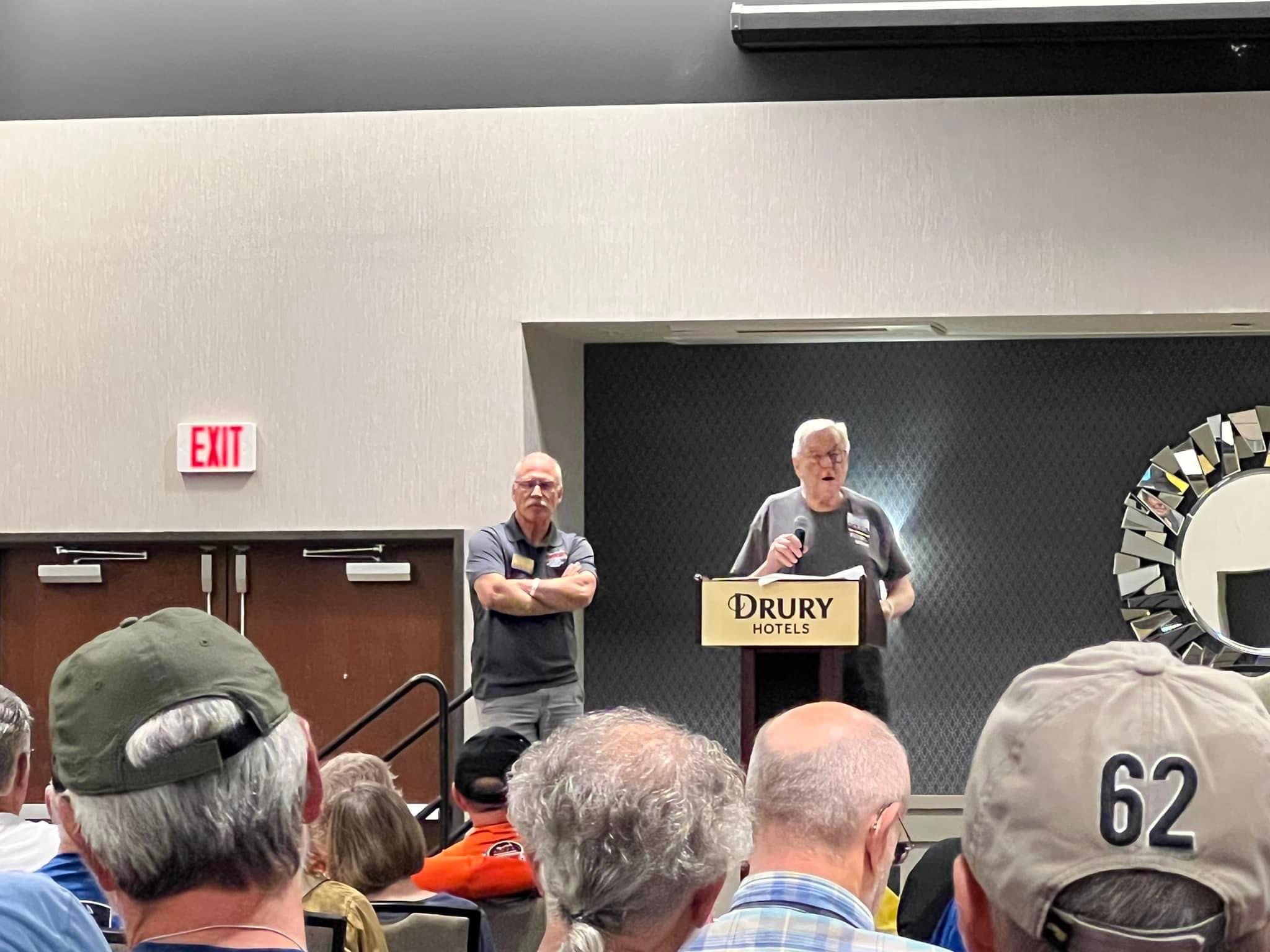 Since as the current club president I have to do a lot of this, I wanted to make sure all of the AV equipment was working properly and that everything was in place to make sure it went smoothly. it was, it did, and afterwards there was a nice bottle of bourbon and some friends that helped me to drink it out on the patio. a great day and a beautiful evening.

One problem had reared its ugly head on Monday. One of the riders had a bike problem and had to have his rig towed about a hundred miles to the local BMW dealer. Dave Lutz and his son, Josh had ridden their Moto Guzzi California w/sidecar from Austin, Texas to attend the rally. While out riding it on Monday its battery had died. We feared a major charging problem and were hoping that the dealer could fix it. After talking with Dave, I assured him that I could take him to the dealer on Tuesday morning, when they opened. Here’s the bike and sidecar at the hotel when they arrived. Tuesday is the day of the rally when we always plan a lunch ride for the members. This year was no different and we had set up Lambert’s in Sikeston, Missouri as the destination. We purchased enough $15 gift certificates for every attendee to have one and let the restaurant know that we would have a couple of hundred riders coming in throughout the day on Tuesday for lunch. A suggested 110-mile route was given to all of the attendees as part of the route package. 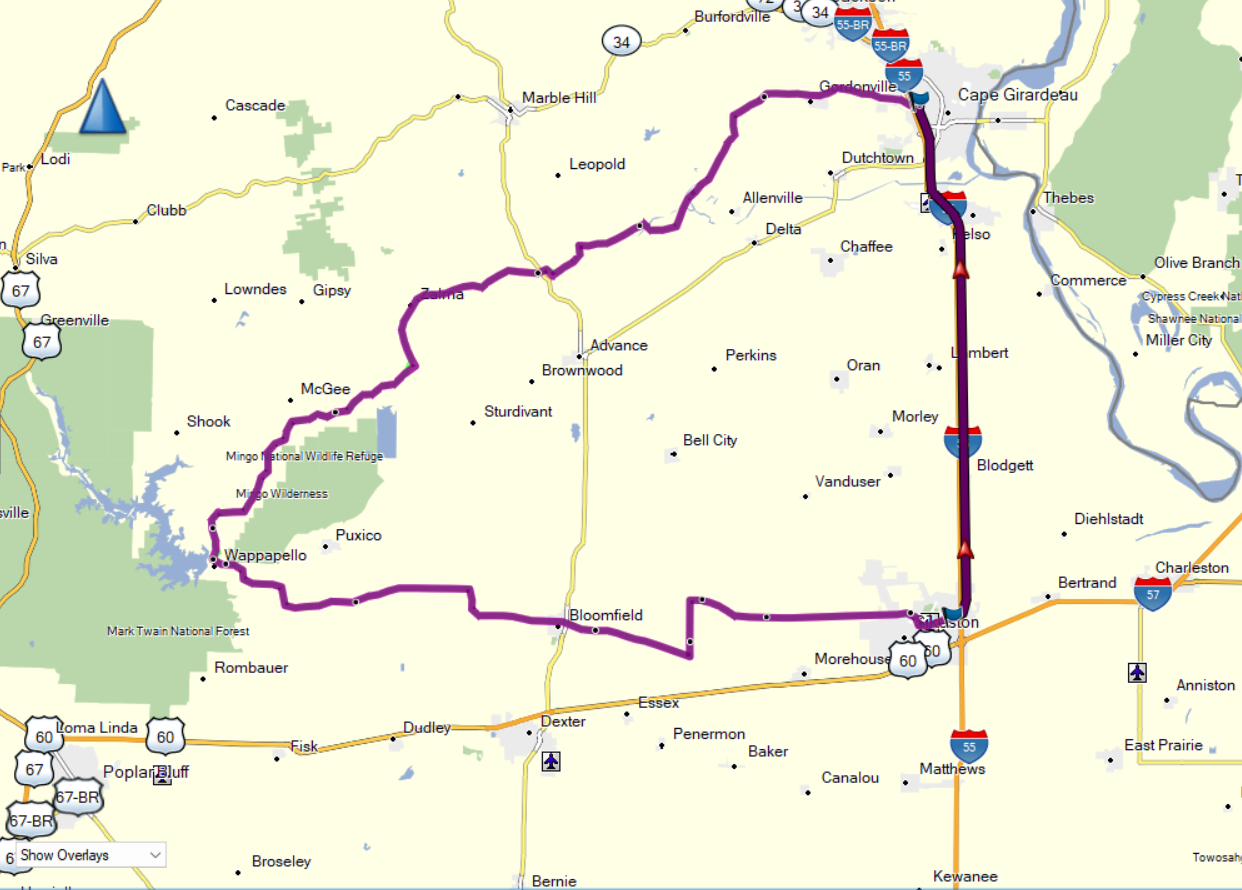 Instead of doing that ride with a group, I took Dave to the dealer. After making sure that they would be able to look at it in a short period, I left Dave at the dealership and headed back to the hotel. Dave said that he would let me know what they found out and if he would need a ride back. A few hours later, he informed me that they had found a blown fuse hidden deep inside the charging system and that after recharging the battery he seemed good to go. Armed with that knowledge, I took the 30 mile ride down I-55 to Sikeston to meet others for lunch at Lambert’s. 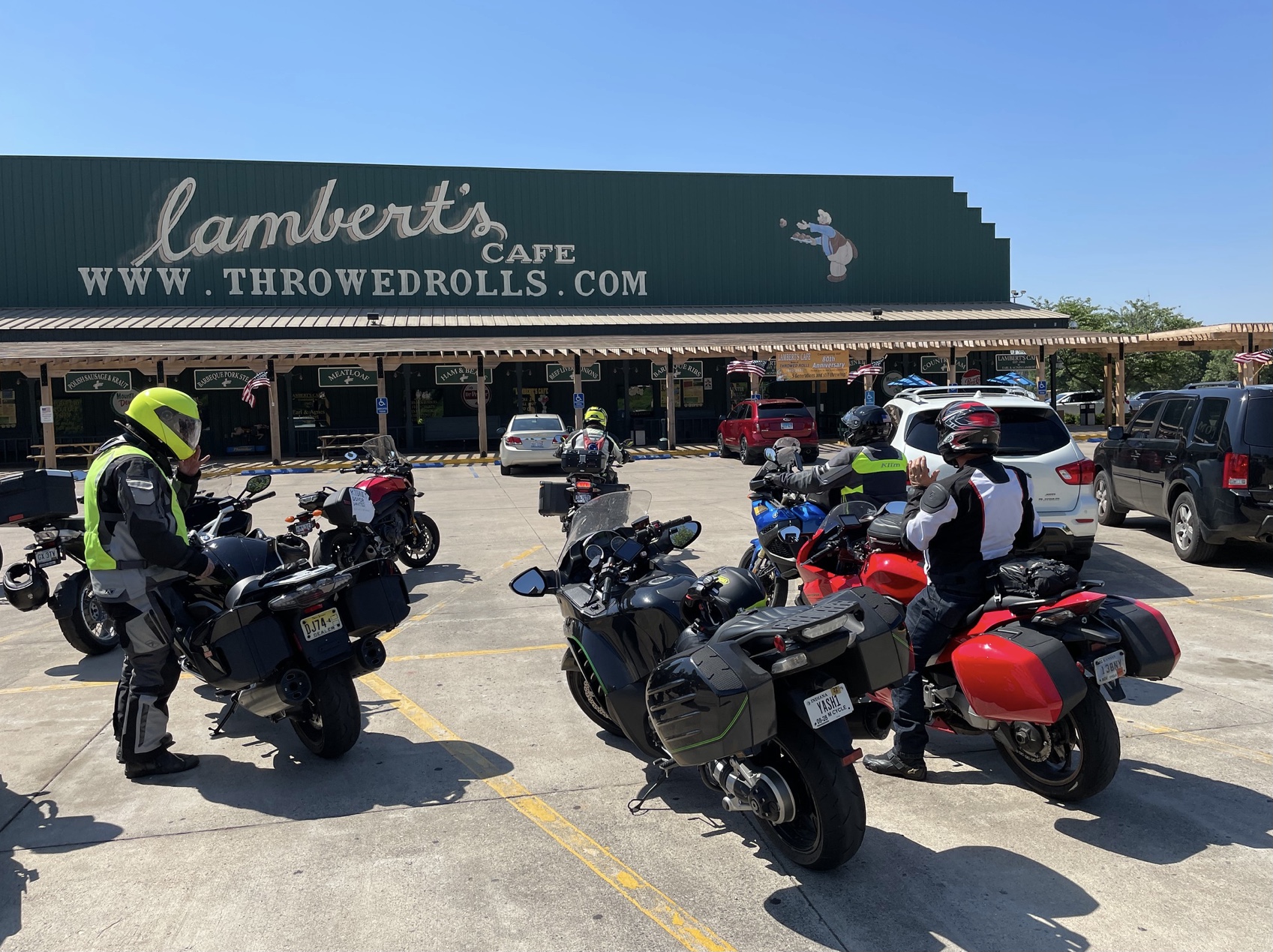 Upon getting there, I pulled into the parking lot and parked among others already there. I then got in line along with some other MSTA members and shared a booth with them. The food was tremendous and HUGE. Lambert’s is known as The Home of Throwed Rolls, and they live up to that name. Someone walks around the hue dining room (it seats 500+ at one time) with a tray of rolls and tosses them to whomever raises their hand. 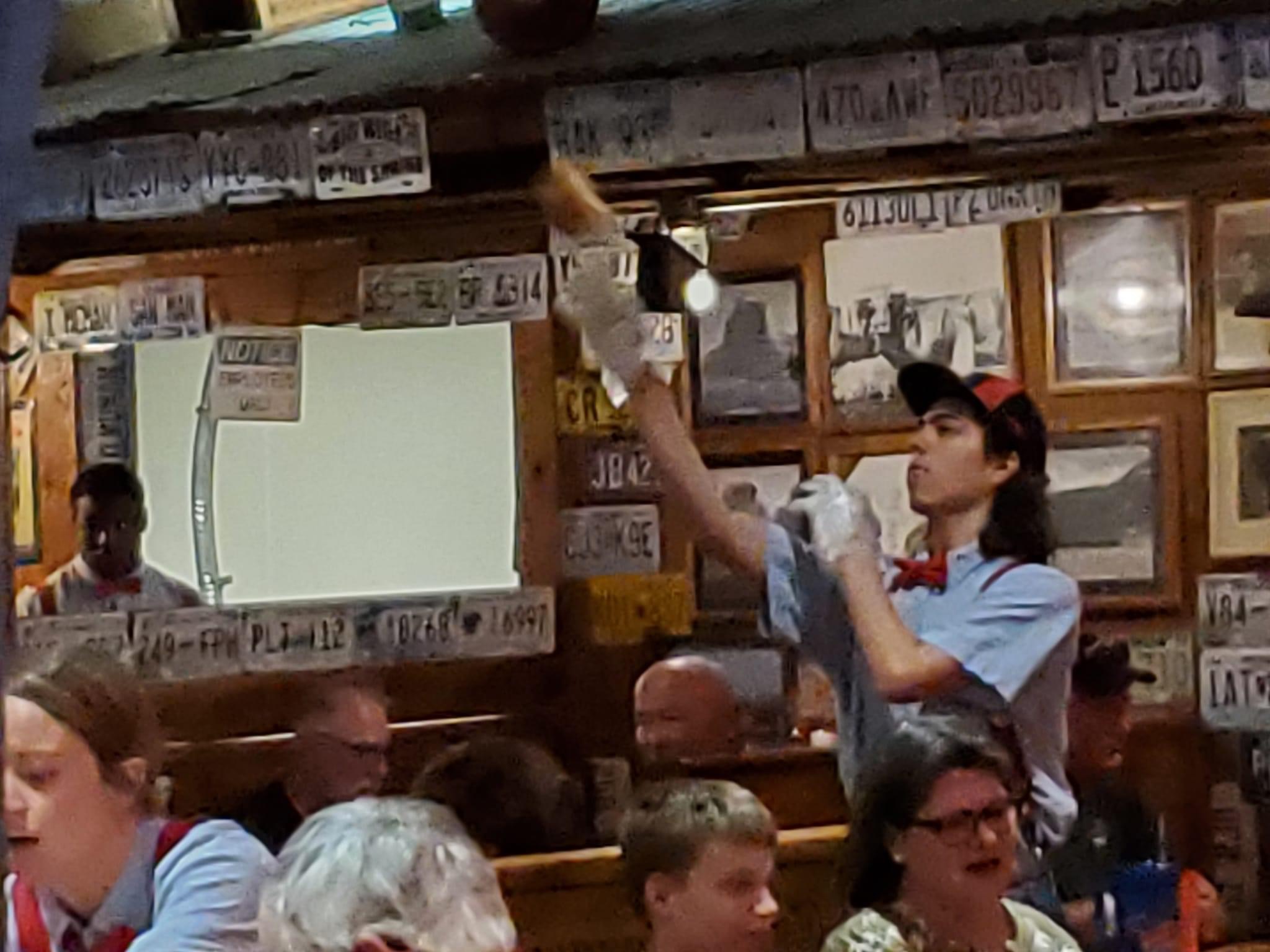 In addition, people walk around with okra, potatoes, sorghum, honey, and other sides and just dish them out to whomever wants them. I chose the vegetarian plate for lunch which gave me 4 dishes of veggies, my choice from several listed on the menu. 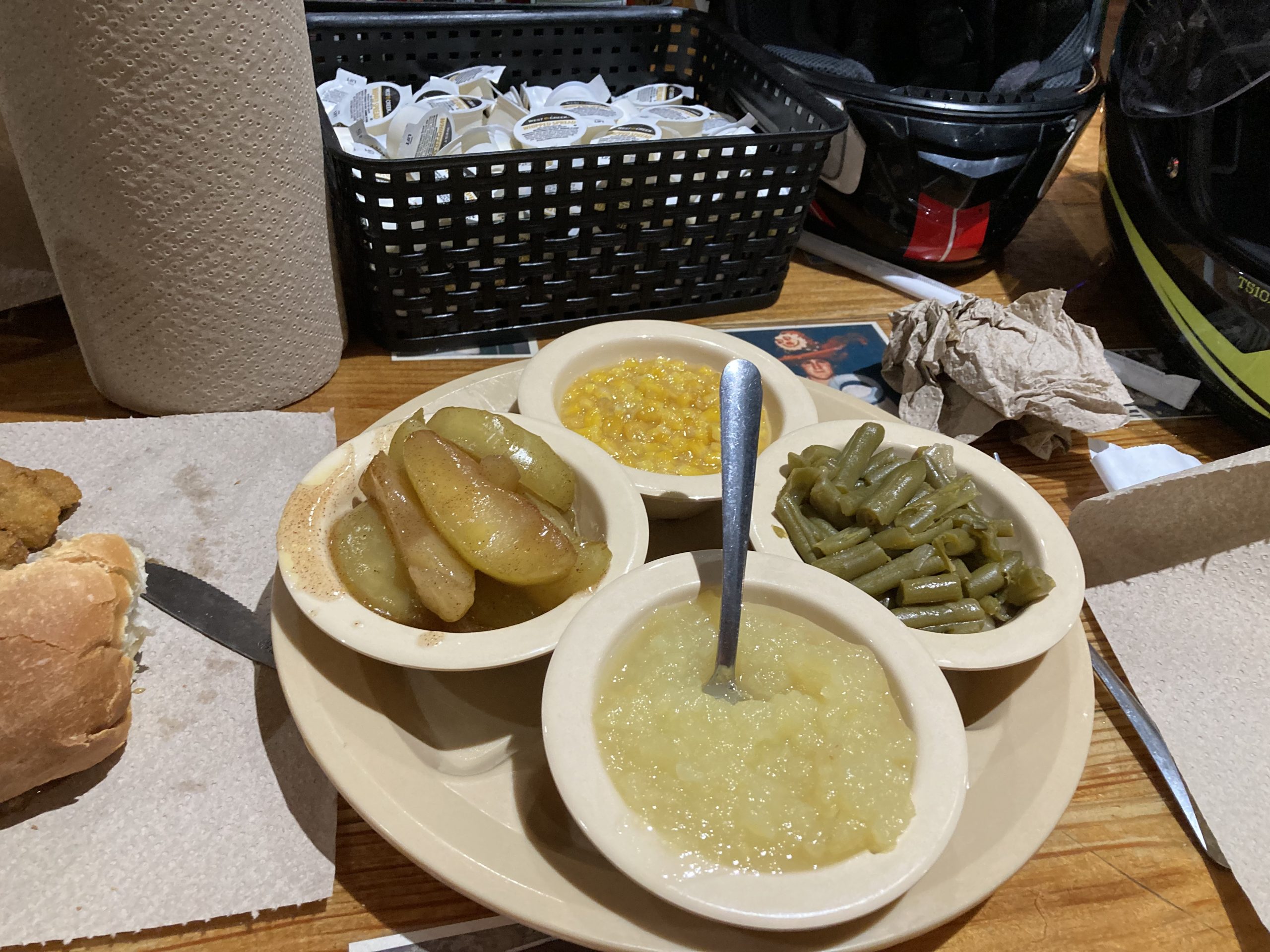 I couldn’t finish it all.

Someone else, not heeding the warning from the waitress, ordered the Chef’s salad. 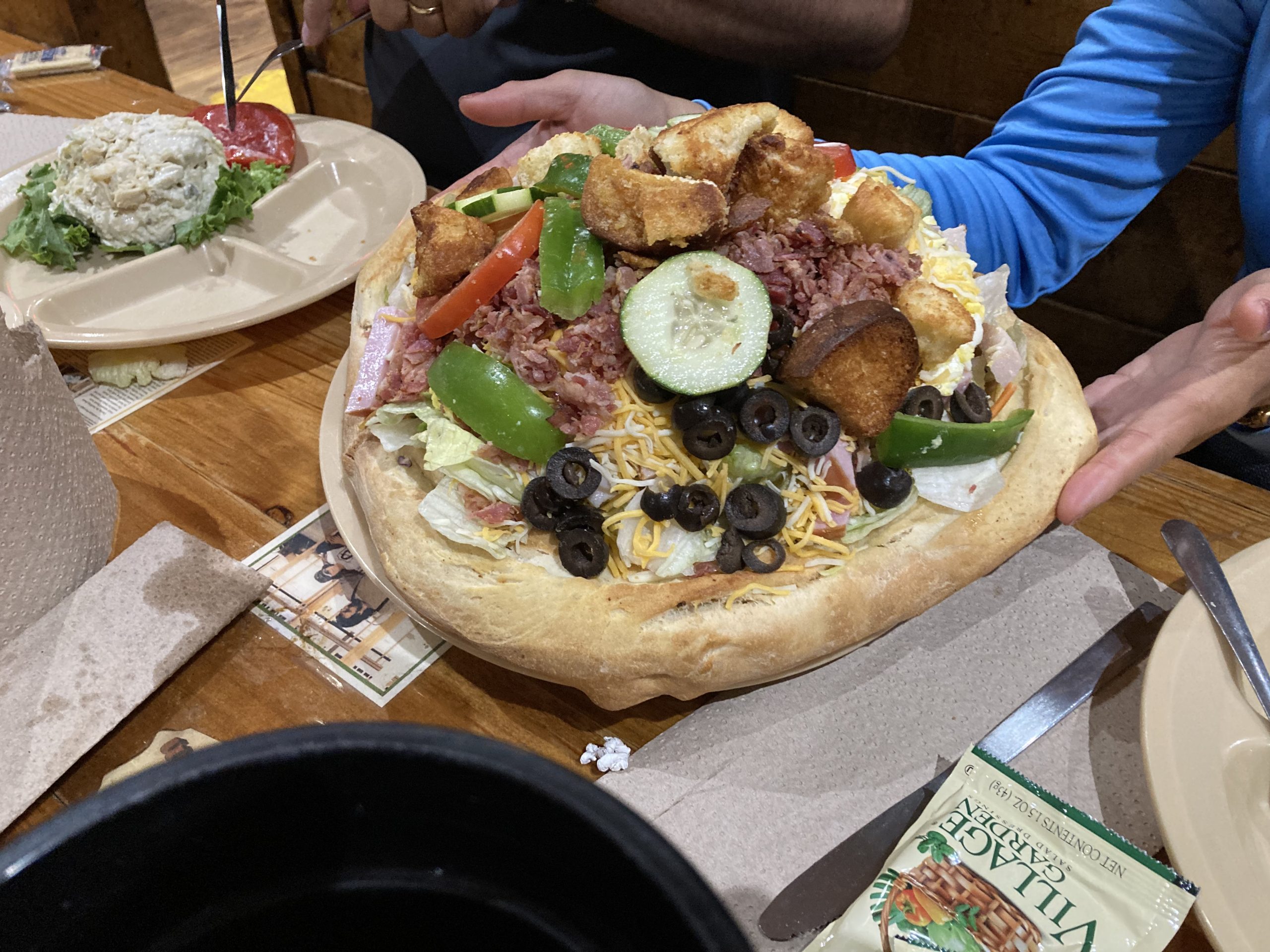 Most of the others I saw were also struggling to finish their orders. Everyone seemed to have enjoyed their visit to Lambert’s and did a quick ride back to the hotel afterwards. By this time on Tuesday the heat had really amped up and I think that most people were only too happy to get back into the air conditioning at the Drury.

Tuesday evening, we always schedule a few seminars for members that wish to attend them. This year he fine folks from KLIM gave a demonstration of their new inflatable safety vest. Many took advantage of this to check it out, and a couple of members were actually part of the demonstration. 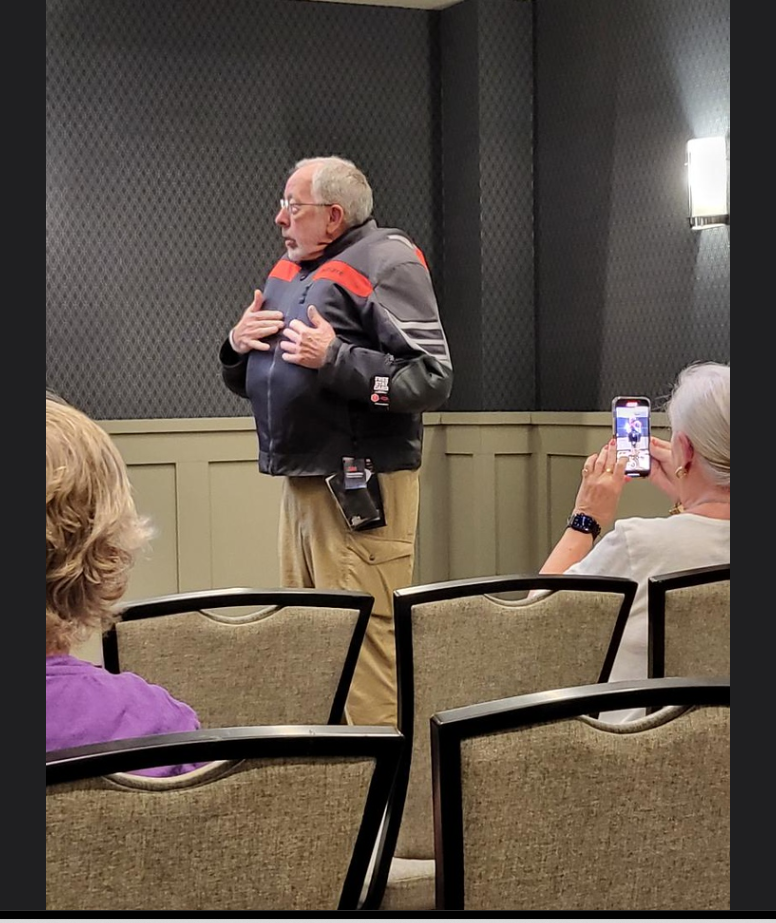 The evening once again found members socializing in small groups all around the hotel and conference center. Some in the main lobby, some in the hotel bar, some outside at one of the various patios, and some in their rooms. Just about anywhere you went you could find some MSTA people hanging out and enjoying each other’s company.