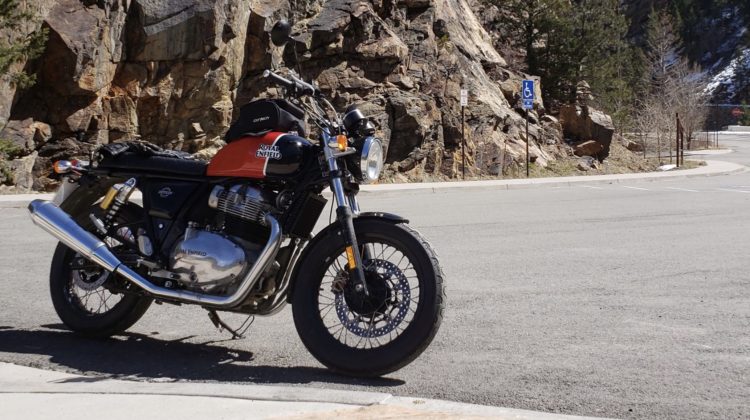 This was originally published in the June issue of the Co-Wy Quarterly Newsletter and was written by Charlie Thompson. It describes how and why he became the owner of a Royal Enfield INT 650 and his impressions of the bike. It has been slightly modified to fit this media template. Our thanks to Charlie for writing it and to Doug Logston for publishing the newsletter.

This past winter I sold two motorcycles, my 2006 Gold Wing and my 2014 BMW R1200GS, and I purchased two motorcycles. One was a 2018 Gold Wing. This article is about the other bike I purchased. You may or may not be familiar with Royal Enfield. If you are, you probably have seen the classic Bullet 500cc single-cylinder model which has been continuously manufactured since 1932. You may not know that Royal Enfield is now making 648cc twin-cylinder models. The one I purchased is the INT 650, known to the rest of the world as the Interceptor.

Royal Enfield claims to be ” the oldest global brand in continuous production”. They build their first motorcycle in 1901. Triumph claims 1902, and Harley-Davidson claims 1903. Indian claims 1901, but was out of business in the early 1950s. Ironically, the 1955-1959 Indians were rebadged as Royal Enfield’s. In 1955, Royal Enfield partnered with an East-India company to build Royal Enfield’s for that market. Royal Enfield (UK) closed its doors at that time, but Royal Enfield (India) did not get the memo and continued production. They are still in production today. The INT 650, and its brother the Continental GT 650, were introduced to the world in 2017 at the Milan Motorcycle show. Personally, I remember seeing the new models at the IMS show in Denver, January 2018. They were being introduced to the US markets as 2019 models. The bike I purchased last March is a leftover 2019 INT 650. The INT is a retro styled parallel-twin motorcycle. When Royal Enfield decided to expand into the mid-sized market, they opened a technology center not far from Triumph’s own facilities in England. RE acquired the legendary Harris Performance Products, giving them chassis development expertise, and also hired engineers from Triumph. The result is a modern classic: SOHC, 8-valve parallel twin, making 47 bhp in a traditional looking but modern handling chassis, 6-speed gearbox, ABS, and fuel injection. This is not your father’s RE of the 1960’s, nor the ancient single-cylinder design that is still in production. If someone is worried about build quality, especially based on the recent history of the singles, the twins are reported to be extremely reliable. In fact, in a recent break-in oil contaminates test, the Royal Enfield 650 twins beat all other bikes, delivering the cleanest oil. RE has worked extremely hard to change its reputation nd market a high-quality motorcycle. It has been reported that the 650 twins are now the best-selling motorcycles in the UK. Royal Enfield is now still selling around 0ne million units a year worldwide. Is it still made like a gun? Perhaps. Does it go like a bullet? Well, keep reading.

Like a lot of guys my age, I have a soft spot for retro classics. They look right, with modern technology to make them practical. There is a purity in riding a simple motorcycle. I have a Gold Wing with all the bells and whistles, but was also looking for a simple machine. One that reminds me of why I got into motorcycling. It harkens back to the day when one could see the engine, hug your knees t the tear-drop tank, scan the twin “clocks” for speed and rpms, and slide around in the seat. It is about listening to the twin exhaust echo off a canyon wall as you maintain momentum through a corner. It is about keeping the speeds up enough for fun but well below adrenaline rush levels. At the end of the ride on a modern classic the rider gets all of this, along with the smoothness of modern fuel injection and the safety of ABS.

After reading and watching everything I could on the 650 twins, I concluded that the INT 650 would scratch my “simple bike” itch. I emailed the three Colorado front range dealers. One didn’t respond and the other two dealers tacked on $1400-$2500 in fees and additional mark-ups. The MSRP on these bikes is right around $6000, depending on color, plus $400-$500 for freight. Searching Cycle Trader, I found that Cheyenne Motorsports had a leftover 2019 for $500 off MSRP, with no freight and no fees! Would I drive 260 miles to save a couple of thousands dollars? Uh, Yeah! So I soon found myself the owner of a “new” 2019 Royal Enfield INT 650.

Personally I think that the bike is very handsome. To me, it looks like what a motorcycle is supposed to look like. One can see the engine. It has real spoked wheels, a tubular handlebar, and just the right amount of chrome. The twin piggy-back shocks and the chrome megaphone mufflers take the styling a bit beyond the 1960s and hits somewhere in the 1970s. The engine is exceptionally smooth with its counterbalanced 270-degree crankshaft. The torque curve is flat, topping out at 37 lb./ft@5250 rpm. The bike weighs in at 445 lbs.(wet), with a short 55-inch wheelbase and a steep 24.5-degree steering angle, which makes the bike feel light and responsive. I now have 500 miles on the bike and can rev it beyond the 4,000 rpm break-in recommendation. I did the 300-mile initial service myself. It is an extremely easy bike to work on.

The power is plenty adequate. 47 hp is not going to challenge any of the Asian 650’s, however it will easily leave traffic behind and will cruise at 75 mph with enough reserve to pass an 18-wheeler. I did wick it up to triple digits very briefly and it had more available. As I said before, the engine is extremely smooth. Especially for a parallel twin. Clutch pull is light and it shifts very smoothly. The brakes are plenty strong for the size and weight of the bike, and it adds some peace of mind knowing it has ABS if you need it.

The suspension is where the budget price shows through. The gold piggy-back shocks may look like Ohlins, but they do little more than merely support the back of the bike. I am a bigger guy, so I have the preload set at its highest level. There is no dampening adjustment and they are very underdamped. The front forks are set up for a rider weighing less than 200 lbs and are non-adjustable. My first modification was a Hyperpro kit with higher rate springs and preload adjusters. It is much better. Even with the soft suspension, it is a lot of fun to hustle down a canyon road, provided the pavement is mostly smooth.

The bike has a very neutral riding position. A slight upper-body forward lean provides a comfortable position at highway speeds. The pegs are right below one’s bum. The OEM seat is rock hard. Other than that, it could be ridden for hours in relative comfort.

One of the best aspects of Royal Enfield ownership and a solution to the drawbacks I’ve listed? The after market is ripe with choices and solutions! Exhaust systems, seats, shocks, bar risers, etc. Even a 865cc big bore kit is available. Most after market parts are very inexpensive when compared with other brands and are readily available from India or the UK. My second upgrade was an OEM “bush plate” from India. Shipping was faster than something I ordered from Canada the same day. The INT is a blank canvas waiting for the owner to make it their won for a very reasonable cost and easy labor. Next upgrade? Perhaps some peashooter exhaust canisters. Go on YouTube and listen to some slip-on mufflers. It sounds wonderful uncorked.

The Royal Enfield INT 650 is a genuinely nice motorcycle. It is inexpensive but not cheaply made. The quality exceeds the price point. it is a fun, simple machine that brings a rider back to the days before we had to have BT, electronic suspension, and navigation. It still has some modern tech like a gas gauge. It is very customizable, like the UJM’s of the 1970s and 80s. Most importantly, it puts a smile on the riders face. When you walk away from it and look back over your shoulder, you’ll think, “Yeah, she’s a beauty”. I like my INT a lot. 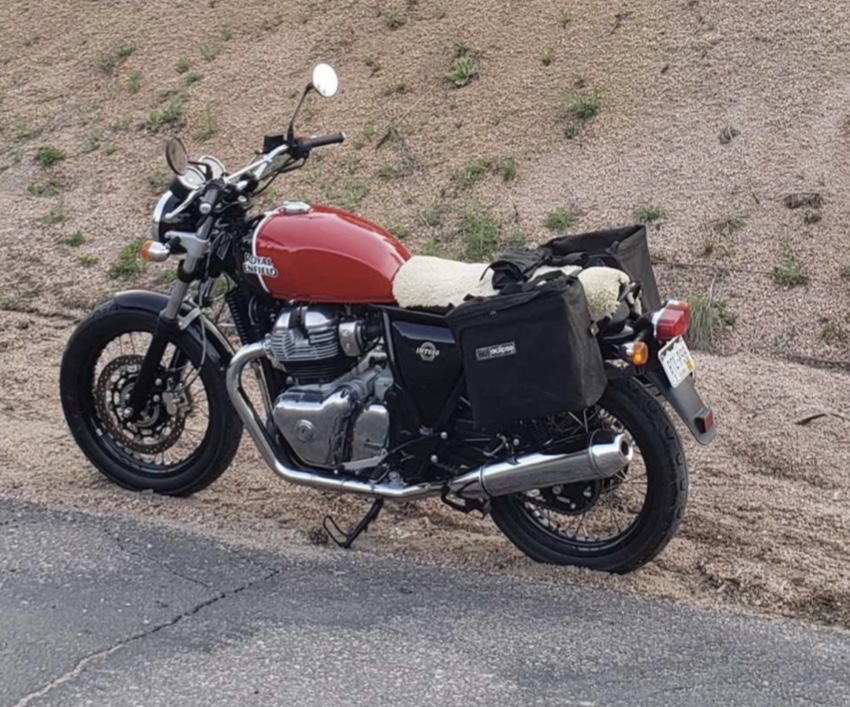