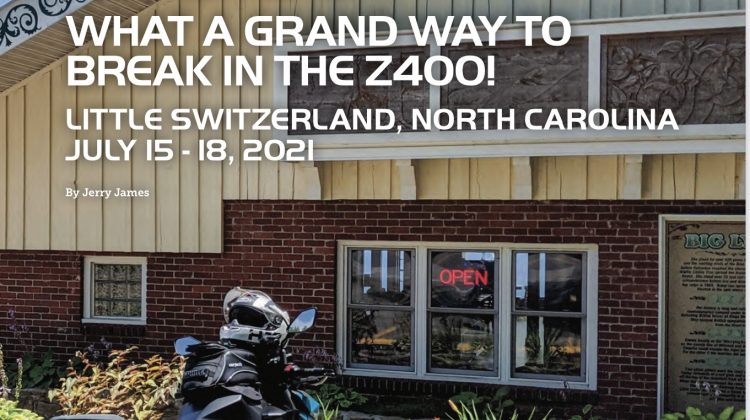 BY Jerry James.
Originally printed in the Autumn Issue of the STAReview, the official club magazine of the MSTA

Earlier this spring, I had to make a decision on what rally I would do over the summer. Last year I attended the Red River Gorge Rally in Mt Sterling, KY. That was a great event and I will return in the future. However, this year I had to choose between the Red River event and the Big Lynn Lodge gathering. I had not been to Big Lynn so that event won out. I booked my room and started to look for a roommate. My friend Rob Burditt was the obvious choice. Our riding styles are compatible and we seem to get along; the two things that make up good roommates on these motorcycle events. We spoke and decided that since we would be trailering to the event we might as well bring our non touring machines. Bob has a beautiful Kawasaki ZRX motorcycle that he can load up into his little transit van, so he was set. About a month ago we went and purchased Jamie a new motorcycle. She is a newly licensed rider and she has not been able to break in her new machine. What better way to break in the Kawasaki Z400? I decided to take the little “Z” to Big Lynn. I am so glad I did! Bob would meet me at the lodge as we were coming from different directions. I had to work on Wednesday so I had the Z400 loaded up and ready to go. I made it through the day and headed out around 4PM. It was HOT and I was glad that I made the choice to trailer instead of riding the Big Versys. This was a much more comfortable ride. I made it all of the way to Paducah, KY before stopping for the night. I was glad I had driven so far, as now the trip on Thursday would be an easy one. I got up early Thursday morning and hit the road. Visions of twisty roads in my head. I was really looking forward to a break from work and I could not think of a better way to do that than riding these great roads. The drive was pretty easy and I rolled into the Lodge around 12PM. I could not check in that early, so I decided to unload the Z and run down the road to have lunch at the Little Switzerland Inn. I rode up and down 226A a couple of times, getting used to the little Z. That bike handles so well and once I got used to keeping the revs up, the bike was a blast! I checked into the lodge and unpacked and got a nap in before Bob arrived. We helped him unload his ZRX. It was a tight fit in his van, but Bob has it down to a science. It is cool the way he can load it up and secure it in that little van. We enjoyed the evening catching up and walking around the lodge kicking tires and talking with all of the riders. There was a great mix of machines. The weather was amazing and I could not have thought of a better way to end the evening. The lodge includes dinner in the price, so when the dinner bell went off it was cool having everyone in the same area, enjoying each other’s company. Fun times for sure! I got to meet Dave Brickner, the organizer of this event. I had chatted with Dave over email and Facebook, but never had met him face-to-face. What a great guy. I volunteered to do the ride report for this event. He made all the riders feel so welcomed.. His smile greeted the riders at the check in table, making for a great experience from the beginning. Thanks Dave for letting me
be a part of your wonderful event. Before we called it a night, we sat on our porch and enjoyed a few adult beverages while chatting with some new friends. I got to meet Chris Parker for the first time. We have communicated a number of times via email; but it is always good to put a face to a name. Chris made our logo for the Ozark Escape and will also be working on a few other projects for Jamie and I so stay tuned. We have big news coming soon! Chris invited us to ride with him and a few others the next day. We were all in.

We woke up to a foggy Blue Ridge type of morning. Breakfast was good and by the time we finished eating, the sun was out and the promise of great riding was ahead. Dan Steinberg would lead the ride today. It was a group of eight bikes, consisting mostly of sport touring bikes. We were assured that the pace would be spirited and that it was! I was afraid the Z400 would be outclassed. The good news was the roads were mostly tight and twisty so the Z400 was right at home. In fact, it held its own very well. Only in the few straightaways did the big bikes run off from my little steed. It was so nice having a local leading the ride. Dan knew all of the great roads. We had a ball. We experienced narrow back roads, twisty roads with little margin for error, and everything in between. At one point we stopped for a break at the Mast General Store. The general store has been in this area since 1883, it is a great slice of Americana! What a cool place. We took our time looking around and chatting. The weather was great and it was starting to turn into one of those magical motorcycle days of riding.

One of the things I have seen at multiple MSTA events is how accommodating riders are to take along new riders. This group did not know Bob and I, yet they invited us to ride with them. I think we got a good compliment when later, in the ride, we asked about how we did and they responded by saying that we kept up and did not crash, so we took that as a win! I have ridden this area in the past but have never taken in the Snake. The Snake is a road full of 489 curves in 22 miles of pristine tarmac. It was a treat and a blast to ride! We were fortunate not to have a lot of traffic, so the experience was a great one! The little Z had a ball on this road and it was a grin inspiring machine. I don’t know if we could have asked for a better day to ride. One of the coolest things about this ride was watching Dan and Matt. I remember riding with my dad and his friends back in the day and it was one of the best memories I have of him and I. It brought back a flood of memories watching these two interact, enjoying some motorcycle bonding time. I made sure to tell them to stop and enjoy these moments. I wish I would have ridden more with my father before he passed. Watching these two made me realize how special those times were with my dad and I on our bikes. Just another reason to love motorcycles and how it brings people together. As we made our way back to the lodge, I was thinking to myself how much fun I had on the Z400. It was one of the best days of riding I have had in a very long time. We got back, had some dinner, enjoyed more adult beverages while listening to the tunes from a very good live band. The band Almost Vintage was a treat for the entire group. It was a beautiful evening. Just another day of amazing riding was in the books. I felt so lucky to be here, enjoying my time with old and new friends. What a great day!

Saturday morning arrived and it was another foggy morning. We took our time and enjoyed the early morning. Coffee always tastes so good on road trips. We walked around and kicked tires. Today will be an easy day. We wanted to ride in the morning and get back in time to load up the bikes before the rains came. Bob and I explored the famous Blue Ridge Parkway while making our way up to Mt Mitchell. We enjoyed a little hike to the peak to take a few pictures. The Blue Ride was in great shape and on this early morning the traffic was not bad at all. I forget how beautiful the BRP can be. After playing tourist, we made our way back to camp. We did stop at a cute little coffee place to take a break. The owner was very friendly. We rode back to the Little Switzerland Inn for a great lunch. We took our time, had a couple of beers and spent some good time reminiscing about the past 3 days. We got back to the lodge in time to load up the bikes before the rains came. Just to hit on it again, the Z400 was amazing. It was the perfect tool for the job! The day was highlighted by one of the biggest rainbows I have ever witnessed.

Sunday morning arrived and at 4:30 am, the alarm went off and the day started. It had rained most of the night and I would drive for a few hours today in the rain as well. It was a long drive home, but a good drive. It was nice being able to put my thoughts together after such a great weekend. I made it home by 5PM. Looking back on the weekend, it was so much fun. I can’t wait to do it again next year and I hope
to see you all there! Let’s Ride! 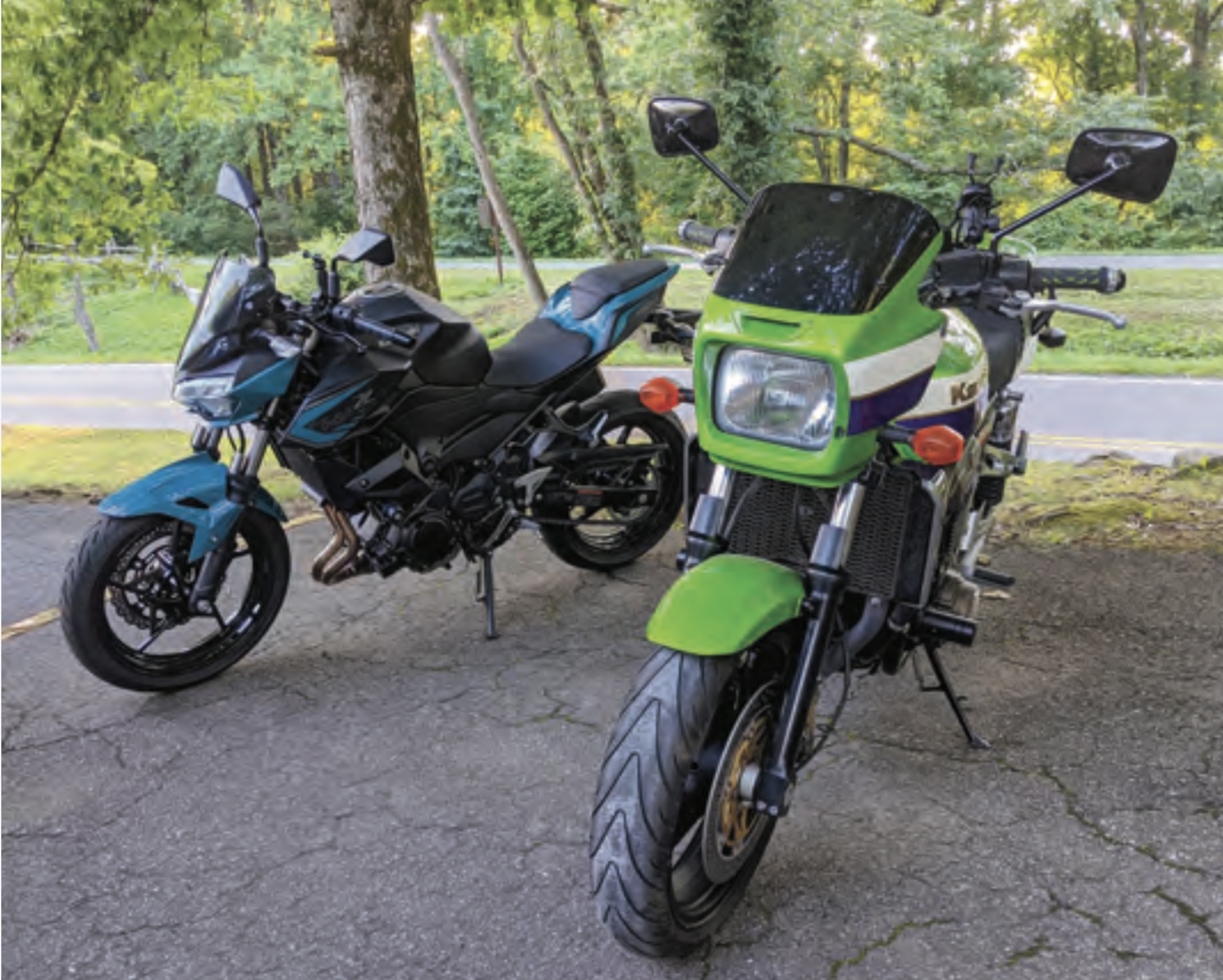 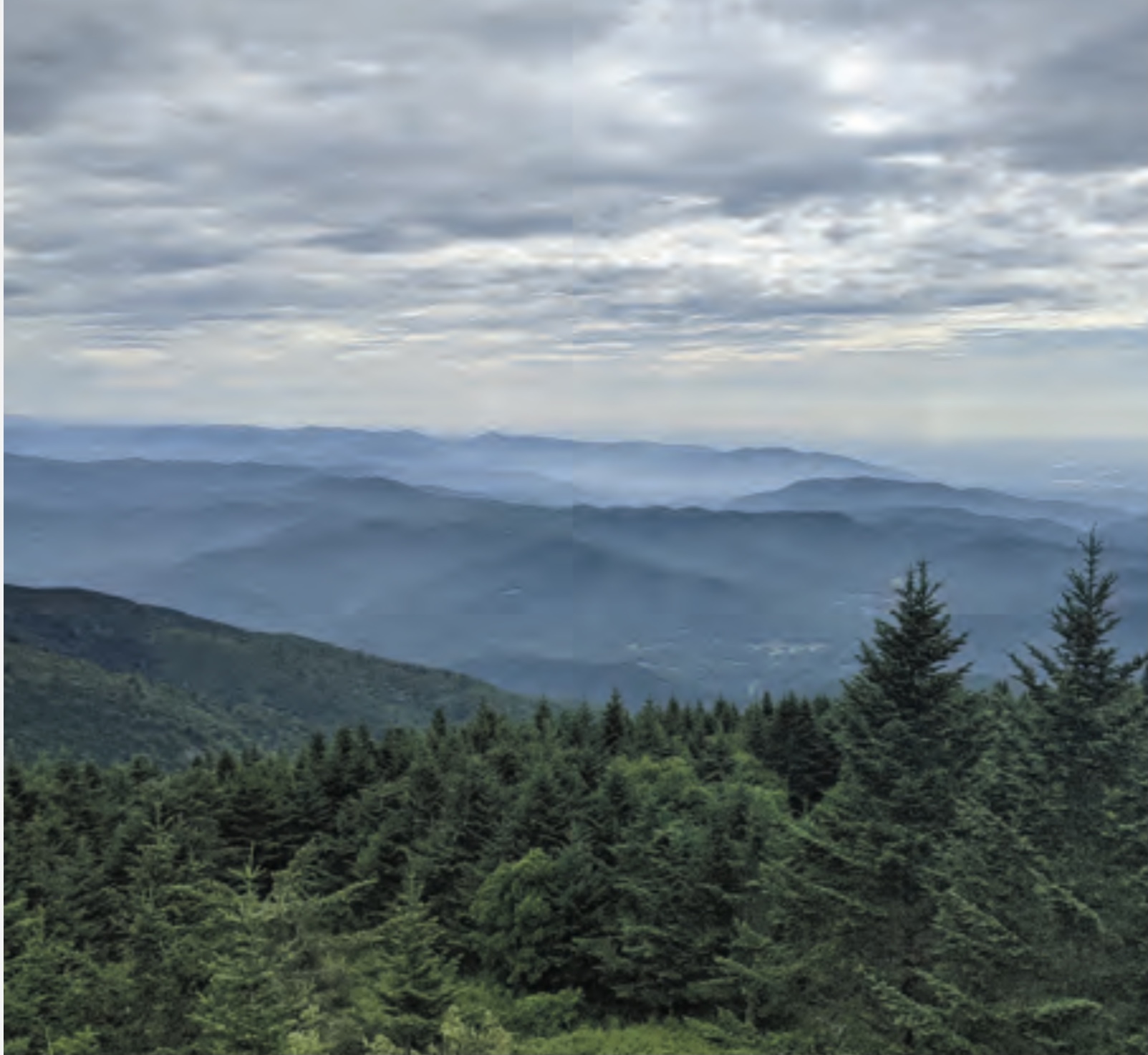 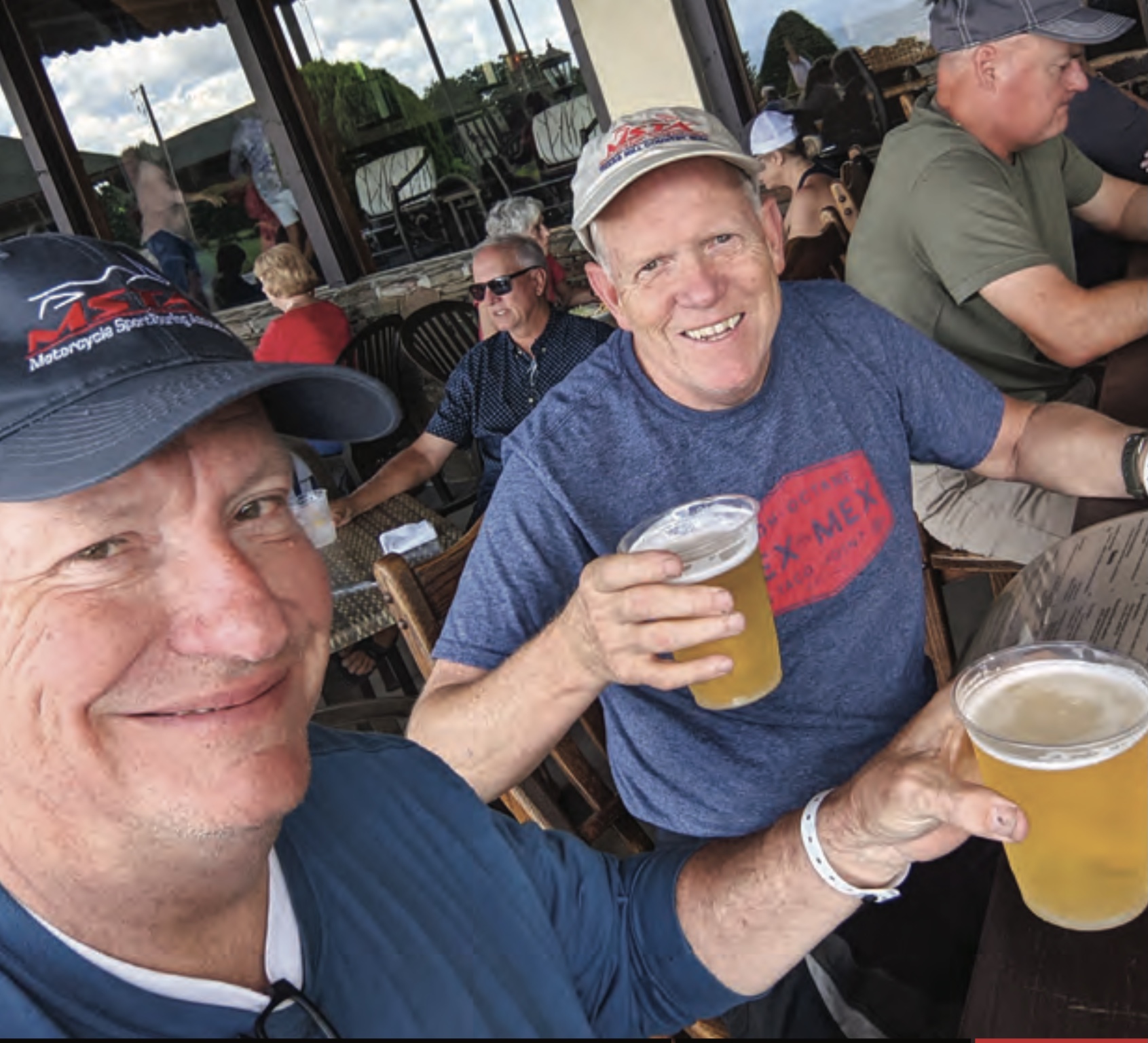 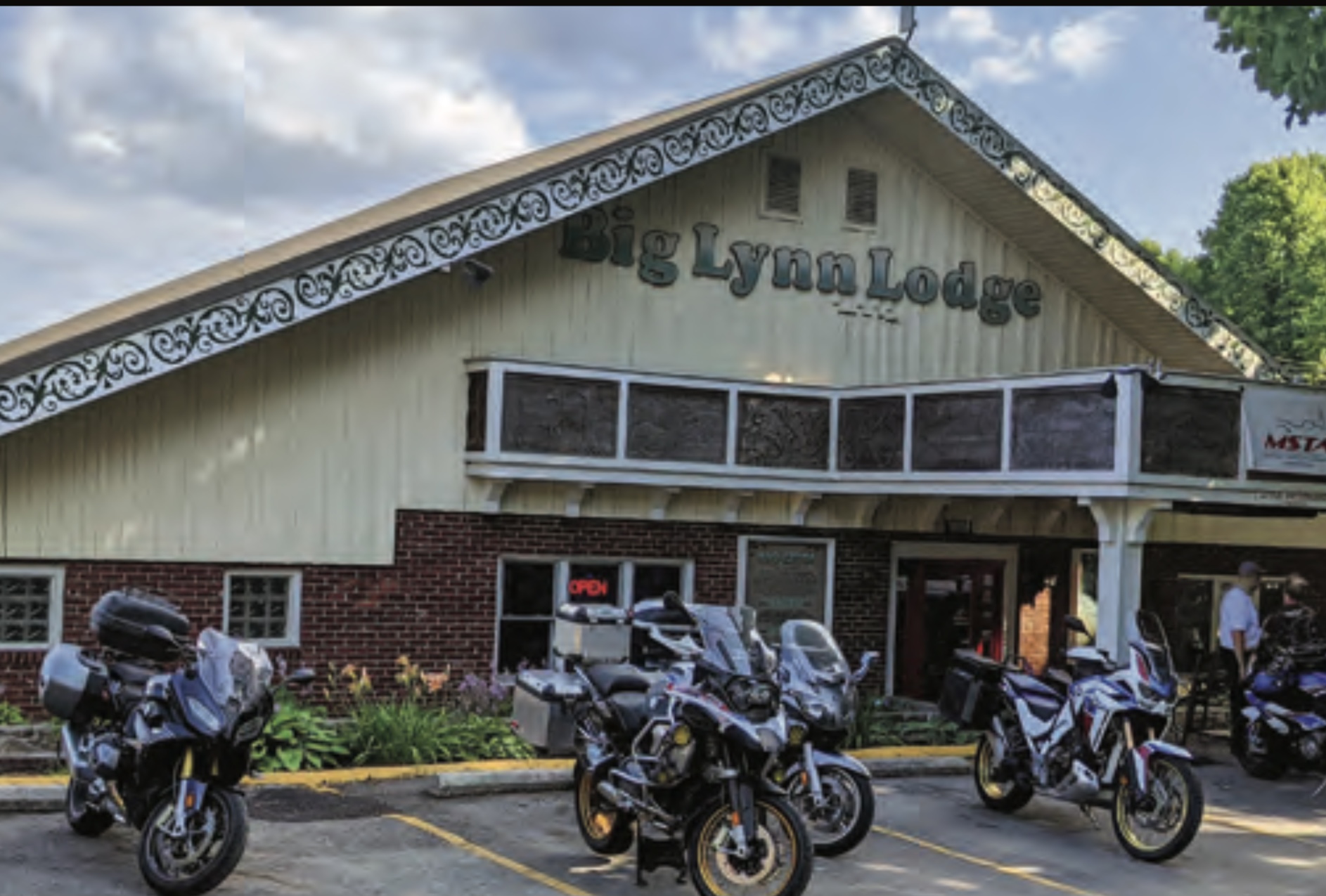 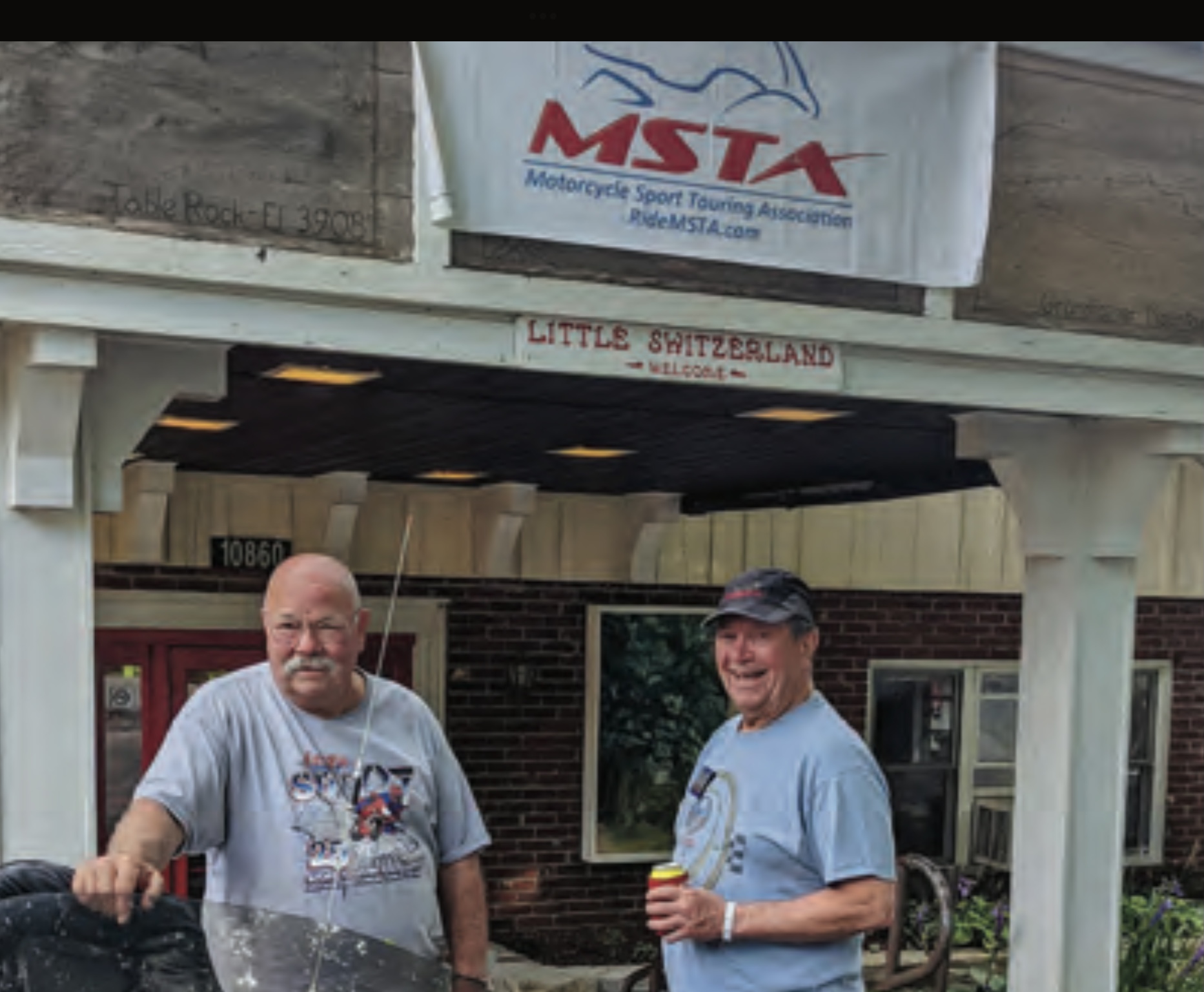 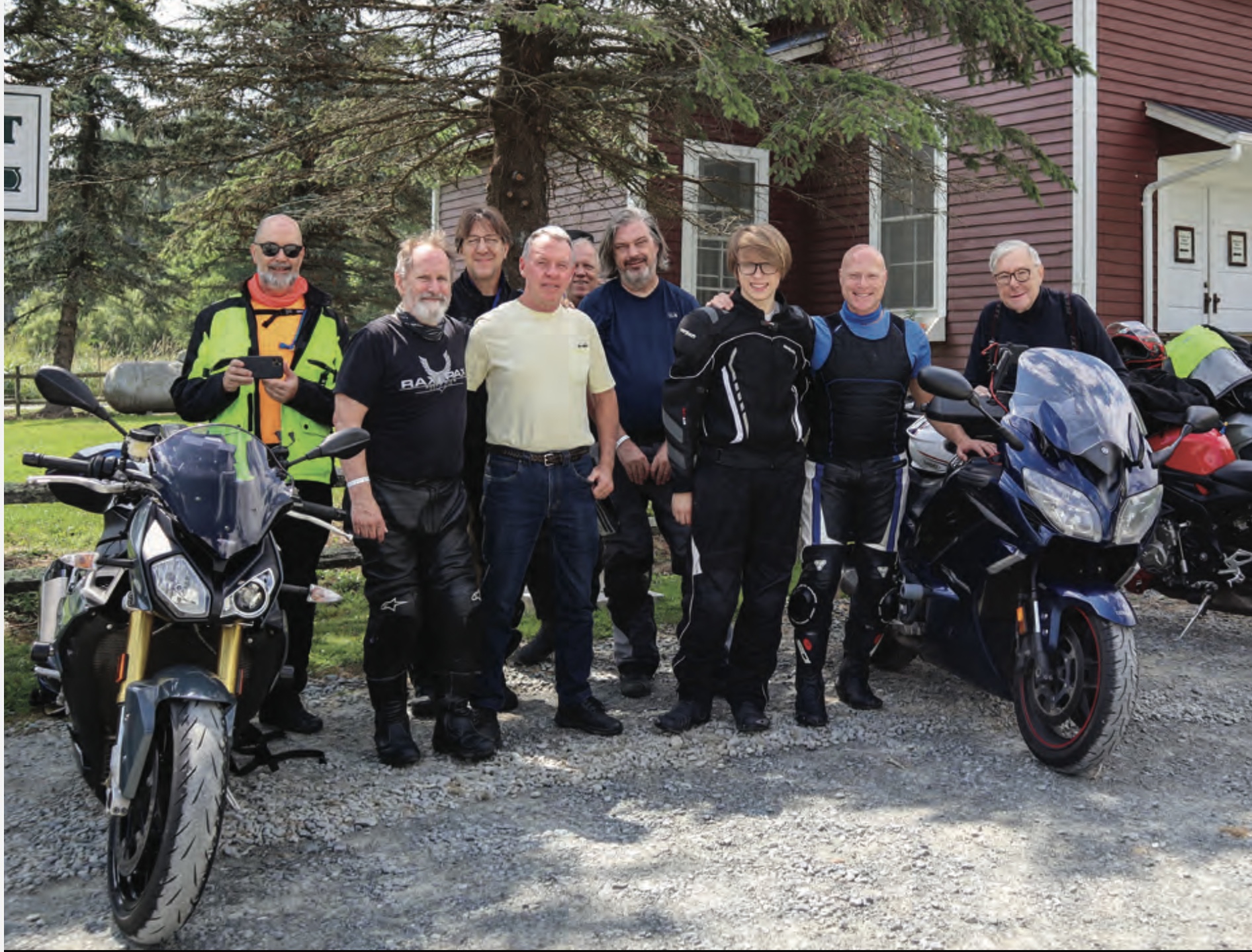