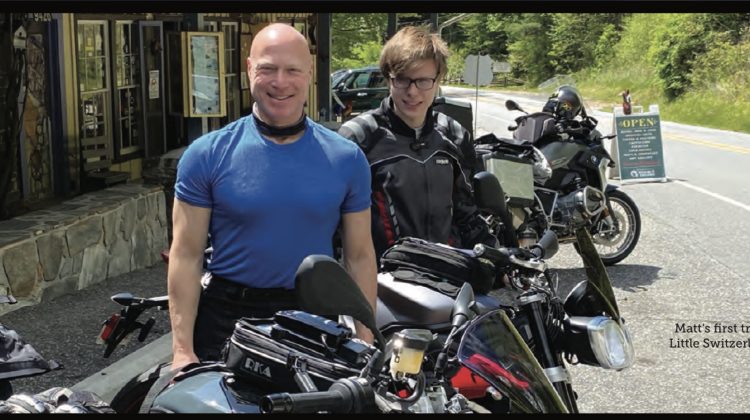 Some might describe me as an “avid” motorcyclist, but the fact that I own 9 motorcycles in three different states probably puts me in the “healthily addicted” category. To me, there is no better feeling than piloting a motorcycle on a perfectly paved mountain road and no better place to ride than the Smoky Mountains.

I owned my first dirt bike, a Honda XR75, when I was 13 years old. And from the moment I took off on two motorized wheels, I was hooked.

A 1983 Honda V45 Magna that I used in college my senior year was my first street bike and, with it, my passion for riding grew. The fun and freedom street riding offered was always new and exciting.

My first road trip was from Chicago up to the races at Road America in Elkhart Lake, Wisconsin. A group of 10, including one of my best friends on his beautiful red Kawasaki GPZ 550, foolishly road up there in the summer of 1991 with no helmets or protective gear. Once we entered the gates of Road America, I had my first experience at a race, but more eye-opening was to see that the majority of the fans who rode to the race wore protective gear. They also had accessories to make their trips more comfortable and safer. I did not even have a tank bag at the time. I learned a few things on that trip: First, more than ever, I knew that sport touring was something I was truly passionate about; Second, in order to more fully enjoy riding and doing so safely, I needed to improve my riding skills; Third, I would always ride with protective gear; and lastly, after watching a father and his son gear up and head out on their bikes, I hoped that someday I would have that same experience of riding with my own son.

This story is about that dream fulfilled.

My son was born in June, 2003…almost 17 years ago. From the moment he was born, I was looking forward to not only our first ride together, but our first trip to the Smoky Mountains. 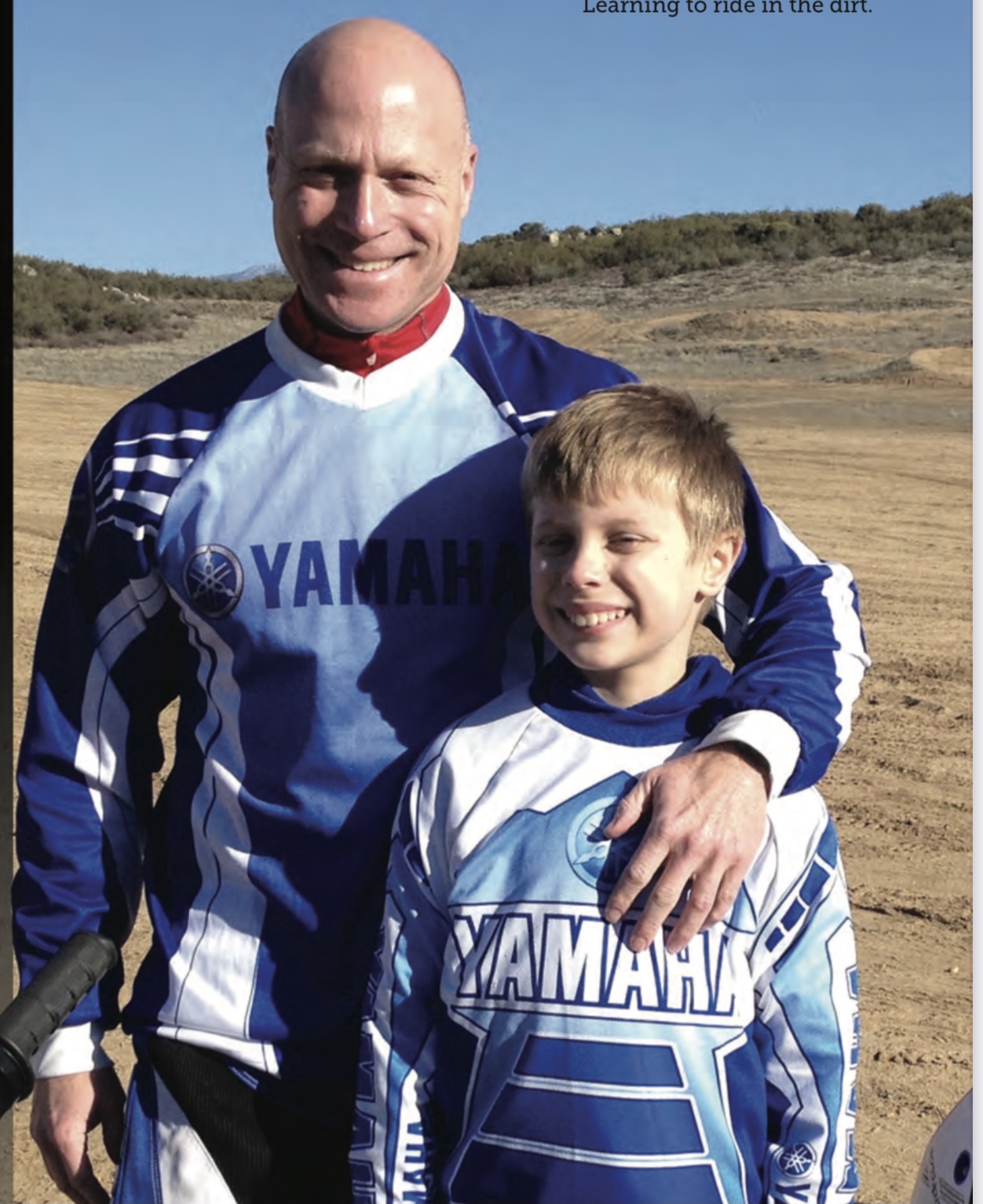 Learning to ride in the dirt

Matt’s first riding experience came at the age of 7. I took him to Gary LaPlante’s MotoVentures riding school in CA to teach him the proper mechanics of riding in the dirt. He took to riding immediately and we enjoyed our time together in the dirt while I bided my time until we rode on the street.

Fast forward to earlier this year. Matt passed his written motorcycle exam in January and was issued his riding permit. To get him ready to ride this spring, I had him read Keith Code’s “Twist of the Wrist”, Jim Ford’s “The Art of Riding Smooth” (a book devoted to riding in the Appalachian Mountains), and had him go through the online Street Skills course (that I first saw in a recent MSTA issue). I wanted him to understand the basic mechanics of street riding. At the International Motorcycle show in early February I got him fully outfitted in protective gear. All we had to do was wait for good weather.

Fortunately, Chicago had a mild winter, so in early March Matt had his first ride on a street bike, a 2016 Triumph Street Triple R. For about an hour he did laps in a large high school parking lot and was immediately comfortable on his bike. He was ready for a ride around the city. This was in the early days of CoVid-19, just a few weeks before Chicago went into full lockdown. The streets were sparse and it gave Matt an opportunity to build his up skill and confidence. Our first day out on the bikes was wonderful.

The following Saturday Matt had his first ride on country roads in southwest Wisconsin. Before this ride we talked about “slow in and fast out” of corners, decisive inputs, look deep into every corner and always have proper lane positioning, all the basic mechanics they teach in books and at the riding schools I shared with him. That day we covered 168 miles and Matt rode smoothly, safely and with excellent control of his motorcycle. Most importantly, he LOVED riding!! I said to him on the way home that, if you loved riding on the rough and broken pavement of Wisconsin, just wait until you ride in North Carolina, Tennessee, Virginia and in the mountains of northwest Georgia. I then began thinking about when I could take Matt out to Asheville and have us ride together on my favorite roads.

I was looking forward to the spring, hoping that the virus would be contained and the country would get back to normal. As we moved through April and it became apparent that Illinois was not going to open up anytime soon, the remainder of Matt’s junior year would be completed via eLearning, and my office was to be closed until July, we decided that now would be the perfect time to escape into the mountains and escape we did! We secured a house in Asheville, loaded up his Triumph in the back of my pickup, and headed to North Carolina.

On the way down I explained to Matt that although these roads, to me, are the best our great country has to offer, they are challenging, and all have elements of risk that need to be respected. I also told him that, by the way he was riding, I had great confidence in him that he was ready to conquer these roads, and in doing so, would also understand why his dad travels so far to ride.

Over the first few days we were in Asheville, I took Matt on 74A to Lake Lure, up NC 9 and Old Fort Road to Black Mountain and on other surrounding Asheville-area back roads. This prepared him for his first group ride led by Doug Pippen, the route master and all round great rider. Doug took us on a route that covered many types of road surfaces that included everything from tight switchbacks to fast sweepers. Matt handled them all, riding safely, in control and having a blast. I could not have been more proud of him. 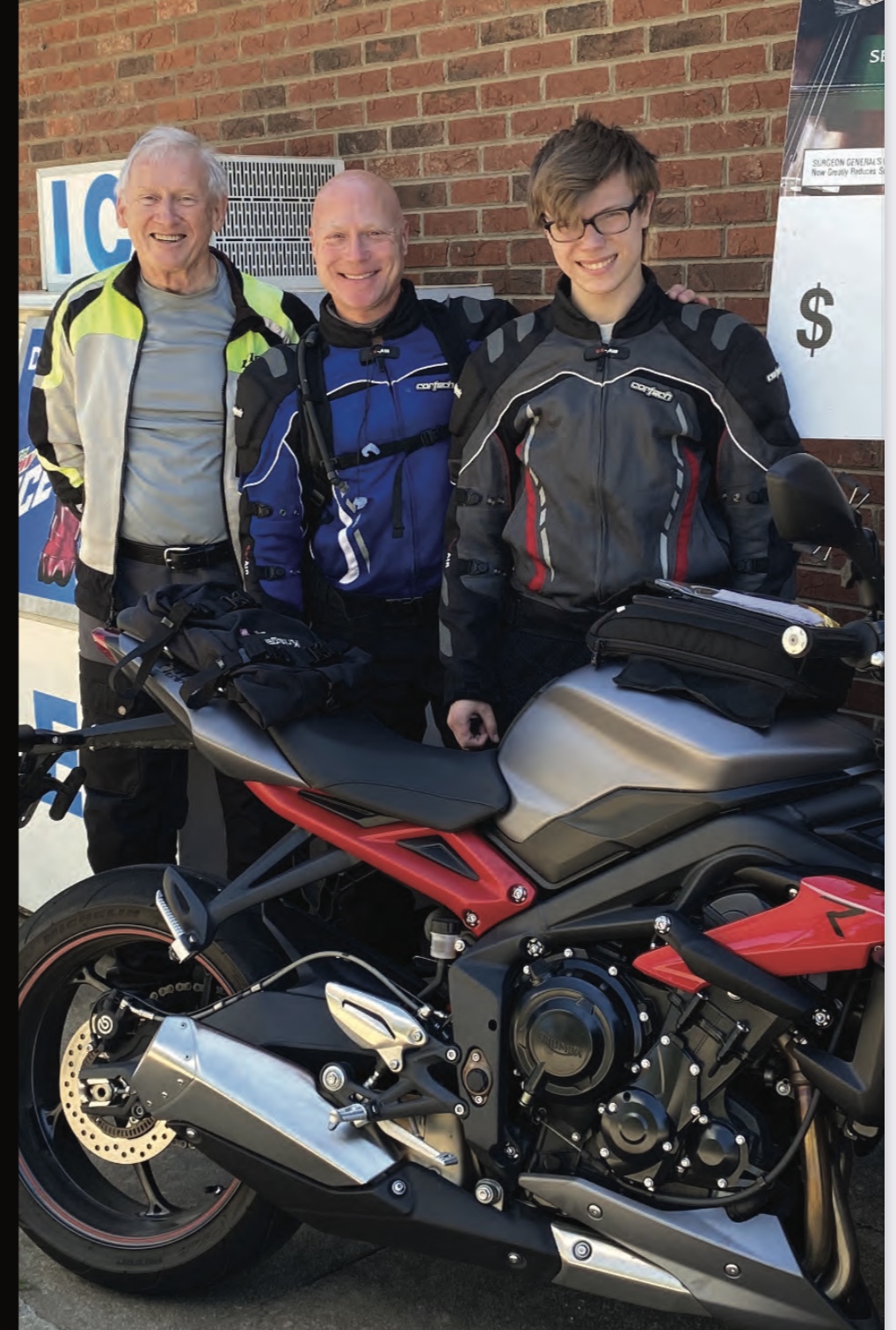 Over the next two weeks Matt and I danced with our bikes together on many of my favorite roads, including: NC 28, 80, 226A, 19W, 209, 129, 321, Roan Mountain, and The Cherohala Skyway. We even stopped at The Tail of the Dragon. Since we hit the Gap on a Saturday, we passed on riding it as it’s always a bit too crowded to enjoy on a weekend. We are saving this for our next trip down. The Snake, the Back of the Dragon, and the great roads of Virginia and Georgia await us.

Riding with Matt in the mountains was better than I ever could have imagined and I will cherish this time with him forever. Our sport is unique and must be experienced firsthand for anyone to fully appreciate. Any chance you get, introduce sport riding/touring to everyone you can, especially to the younger generation. Let them experience for themselves the same joy we all get out of riding.