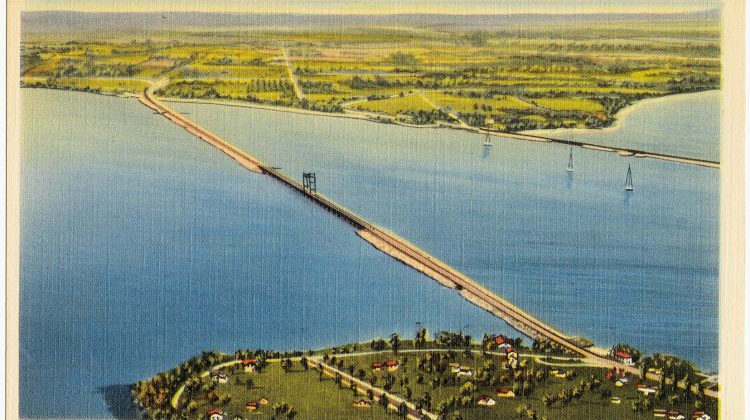 After riding Ohio State Routes 83 and 339 on Saturday (Sept. 4), I did a shorter and less technical route on Sunday. I had a lot to do around the house during Labor Day weekend and couldn’t spend a lot of time on the road all three days. I made Sunday my short ride day and decided to explore a section of freeway I hadn’t ridden before.

For the many years I’ve had an addiction to Google Maps, the western freeway portion of Ohio State Route 2 has consistently found a way to catch my eye. Located a short way north of the Ohio Turnpike, the non-toll expressway parallels the toll road Turnpike across north central Ohio. I’d wondered what was along the route that justified the expense of constructing a second freeway through a not-heavily-populated region.

The freeway portion of SR 2 on the west side of the Cleveland metro begins at an interchange with Interstate 90 — about two miles from where I-90 joins the Ohio Turnpike. As I’d suspected from looking at the route on Google Maps, the first about 40 miles of the route is relatively nondescript. Most of the route was recently repaved, and it was a nice, smooth ride around the outskirts of the small cities of Amherst, Huron and Sandusky.

The several signs I saw near Sandusky directing motorists on how to access the Cedar Point amusement park explained to me at least some of the rationale for the expressway’s construction.

The part of the ride that really got my attention was the about three-mile strip that carries SR 2 and Ohio State Route 269 across Sandusky Bay. Two earthen causeways and the 2,049-foot Thomas A. Edison Memorial Bridge provide an expressway connection between the cities of Sandusky and Port Clinton.

A little online research after the ride revealed the bridge was built in 1960 to replace a lift bridge and set of causeways just east of the current bridge (pictured in the header photo). The causeways of the old bridge remain today and serve as fishing piers.

I had traveled to southeastern Long Island in early August, and the view of the expanse of Sandusky Bay had a very similar vibe to the drive to the beaches near Hampton Bays. The wind was whipping pretty good that day, and the view of the waves rolling across the bay — as well as the houses lining the bay coast — was close to breathtaking.

My girlfriend enjoys sailing, and this is an area we may need to explore more now that we live in northeast Ohio.

After riding though the outskirts of Port Clinton, I stayed on the freeway alignment of SR 2 a little past the first at-grade intersection near the U.S. Military’s Camp Perry installation and then turned around and headed for Ohio State Route 53. I was running low on fuel but wanted to make it to a Speedway station. I had a gift card I wanted to use. I found a Speedway on my GPS in Fremont that was just a little past the nearest interchange with the Ohio Turnpike — the route I’d planned to take back to Cleveland to compare to SR 2.

After a short ride into the heart of Fremont, I backtracked on SR 53 to the Ohio Turnpike interchange and began the journey home. The Turnpike had several long 50 mph work zones that hampered my pace, but the ride home was otherwise uneventful. I’ve ridden or driven portions of the Ohio Turnpike prior to my ride, and the mostly flat terrain and 70 mph speed limit make the Turnpike a brisk, mundane ride. I don’t like taking the same route home that I just rode, so I stayed on the Turnpike to exit 151 and followed Interstate 480 to Interstate 271 to get back to Cleveland’s east suburbs.

Though the vast majority of both routes are a bit dull, the Edison bridge gives SR 2 an edge in riding enjoyability. The ride on SR 2 to the exit for SR 53 and on to the Turnpike is about 10 minutes longer than simply getting on the Turnpike at Exit 142 — but on my next trip west, I may give SR 2 another go.