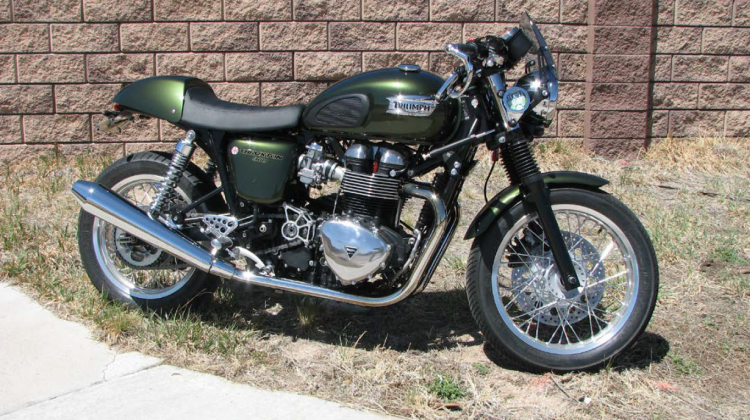 Editor’s Note: This story was originally published the June 2013 edition of the MSTA Colorado/Wyoming Chapter newsletter. The story has been edited to match the MSTA website’s style.

In addition to being lifelong fans of European and Japanese sport touring motorcycles, Mary Jane and I have also enjoyed owning Hinckley Triumphs.

Our first was a 1995 Trophy 900 Triple — a great sport tourer that we happily rode for eight years before trading up in 2002 for a new BMW R1150RT. Our second was a 2005 Speed Triple, which was truly an outrageous performer and exciting commuter bike.

The “new” Triumphs — particularly the triples — are unique sporting motorcycles and a bit more durable and reliable than some of their predecessors. Triumph has enjoyed a renaissance in the last decade by successfully marketing modern vintage motorcycles as well as sport, sport touring and dual sport machines.

Of note, we recently bought a 2013 Triumph Thruxton 900 EFI twin. As you probably know, the Thruxton is a factory “cafe” rendition of the 900 Bonneville twin.

Out of the box, the Thruxton features clubman-style, down-swept handlebars, modest rearset pegs, and a stylish seat cowl. The 2013 model came in a dark metallic green with gold accent stripes.

The stock Thruxton is equipped with an air-cooled, fuel-injected, DOHC, parallel-twin engine displacing 865cc. The factory claims 68 horsepower at 7400 rpm and 51 pounds-feet of torque at the crankshaft. The engine redlines at 8500 rpm.

The power delivery is smooth, linear and certainly entertaining on a bike with a 58-inch wheelbase. Yet, this is no sportbike. Final drive is via an X-ring chain, and the motorcycle utilizes a wet clutch and 5-speed transmission. Fuel capacity is 4.2 gallons (16 liters), and wet weight is about 506 pounds.

Fuel efficiency is reported to be 43 mpg in city conditions and 57 mpg on the highway. We’ve been averaging in the high 40s at semi-lunatic speeds. Suspension is provided by KYB on both ends, with a 41mm front fork and twin shocks — all adjustable for pre-load only.

We also recently installed R&G Micro turn signals, which clean up the front and back ends nicely. Total weight reduction from these fairly simple mods has been significant — more than30 pounds so far.