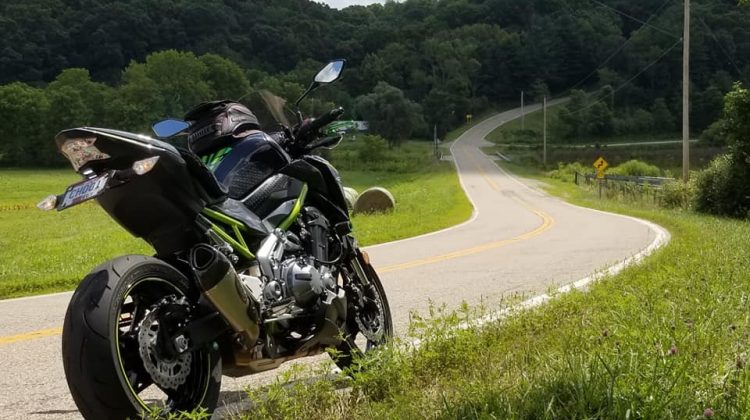 The annual gathering of sport touring enthusiasts in the Ohio River city of Marietta, Ohio – which is nestled near the many twisty and scenic roads of southeast Ohio and western West Virginia – took place at the Hampton Inn and Microtel Inn & Suites on Pike St. and had its best attendance since Kern took over running the event in 2018.

Kern reported that 143 people registered for the rally, of which 137 showed up (technically 138, as I forgot to make my way over to registration when it was open on Saturday). Attendees hailed from 17 states, including Florida, Alabama, Iowa and South Carolina.

For 2021, the rally was relocated from its former home at the Baymont Inn on Pike Street to a two-hotel setup to the west of the old site. The Hampton Inn and Microtel Inn & Suites, located at 508 Pike St. and 506 Pike St., respectively, proved to be a successful new venue according to Kern.

“People were unhappy with the Baymont,” Kern said, noting there had been some maintenance issues with the facility and that some of the perks of holding the rally there – such as the on-site restaurant and excellent breakfast offerings – had declined in quality over time.

“The management was very cooperative, though,” Kern added. “The meeting room was free to use and there is a nice grassy area that we used for outdoor activities.” The hotel is two stories with multiple entrances, which Kern said made for good motorcycle parking with short walks to most any guest room.

Kern’s positive experience at the Microtel — which plays host to a FJR1300 rally each May – convinced him to approach the hotel’s management about becoming the new home of the FlyBy. Kern said he later learned the management company also owned the adjacent Hampton Inn. He noticed the Hampton’s outdoor patio space, which he figured would be a good setting for rallygoers to gather each evening. Though the Hampton does not have a meeting room – which is needed for registration, seminars and other activities – the Microtel does.

Overall, Kern said he was thrilled with how the rally went at the new venue. He reported hearing no negative comments about the rally, spare some misunderstanding about a parking situation for vehicles with trailers.

One common rally problem Kern tried to solve for this year’s FlyBy is help new attendees find other riders to ride with. Kern said that many of the attendees come to rally each year to ride the same group of people they’ve ridden with in years past. It can be difficult for a new attendee to find a group that’s an ideal fit for them to ride with.

Though some MSTA rallies have sign-up sheets for particular rides, Kern wanted to develop a more proactive method for helping new rallygoers get into the group riding mix. He developed a one-page questionnaire that riders fill out with information about their riding preferences and kept the completed forms in a stack. New riders could fill out the sheet, then look through the other sheets to find riders who are a good match for their riding style. Kern said the method is a work in progress but was pleased with the number of rallygoers who participated in the system.

Though Kern had to cover the registration table a bit, he was happy that he got to ride every day of the rally and got to do everything he’d hoped to during the week – including lead a ride for first-time attendees. He also was pleased with how well received one of the rally’s new vendors for 2021 – Vehicle Enhancements Inc. detailing service – was by rallygoers. This year’s event also featured a presentation by the emergency medical transport company SkyMed.