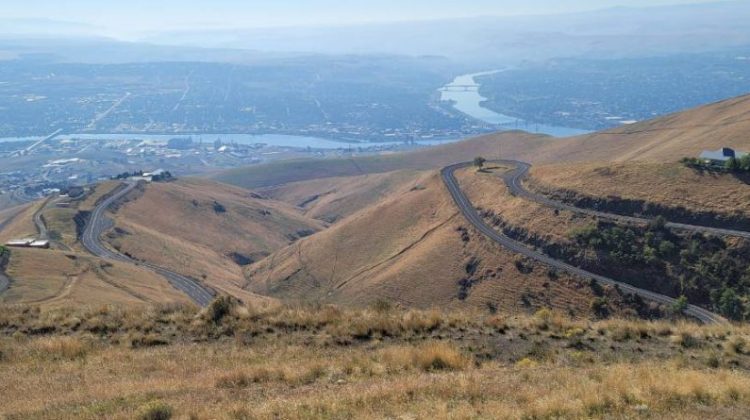 Looking for picture-perfect motorcycle roads in Idaho? Check out the small town of Lewiston on the Snake River near the border with Washington and Oregon. Lewiston is surrounded by Idaho’s best motorcycle roads. Nearby river canyons and forests are laced with the kind of scenic and curving roads sport touring riders crave. Work Lewiston into a long tour or plan it as a destination all by itself. Either way, the area has enough roads to entertain riders for days.

Basecamp Lewiston
Lewiston offers an ideal overnight location for a touring ride or a place to start and end day rides into the surrounding forests and grasslands. The town boasts a population of more than 35,000 (2022 census) and plenty of establishments to feed and entertain riders during the afterhours (Lewiston travel guide). 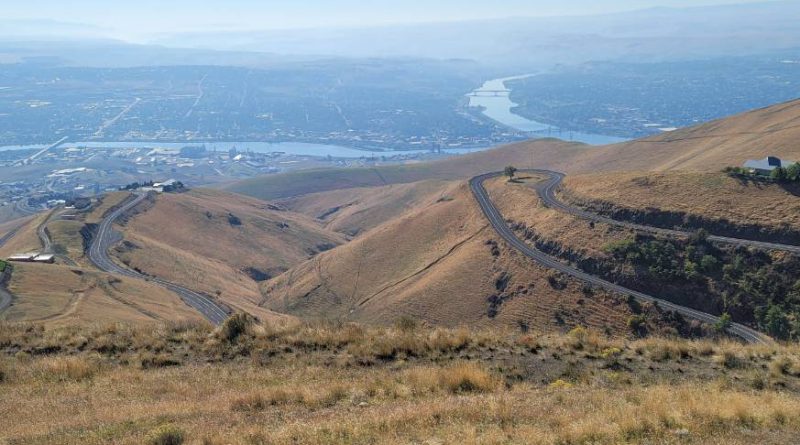 Lewiston Idaho
Downtown Lewiston Idaho cornered on the west by the Snake River and Washington State and on the north by the Clearwater River and Lewiston Hill. Photo © American Sport Touring.

Getting to Lewiston is a treat by itself. All roads pass through scenic landscapes of every kind. Riding up from Oregon to the south, take OR-3 and then WA-129. From Washington on the West, take either US-12 or WA-195 depending on which side of the Snake River you’d like to ride. From the east, follow US-95 into town. 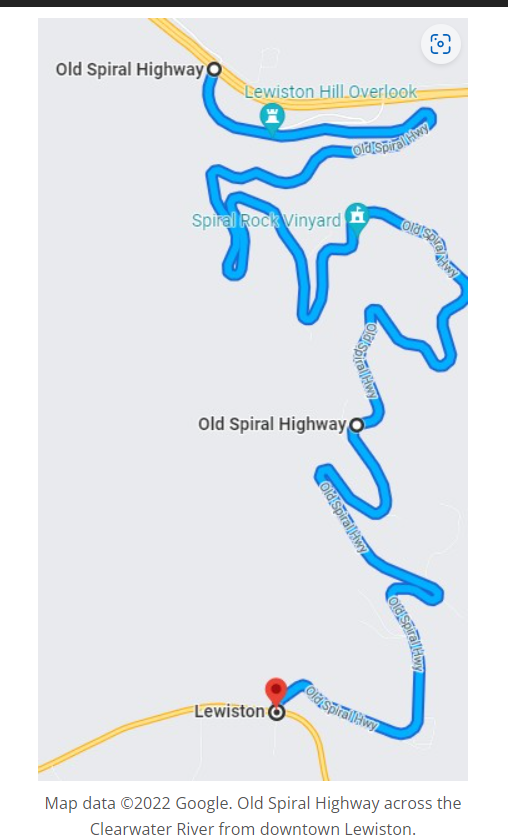 The few small ranches that dot the hillside, and a handful of tourists, produce the only real traffic on this 2000-foot hillside ascent (or descent). The Lewiston Hill vista point at the top offers stunning views of the town below and the convergence of the Clearwater and Snake Rivers. The Snake River flows from the south and turns 90 degrees west into Washington State were it ultimately empties into the Columbia River. The Clearwater River runs east to west before converging with the Snake. The two rivers form the northwest most corner of Lewiston.

Round Trip Ride to Elk City
This ride will take the better part of a day but can comfortably start and end in Lewiston. The highlight of the day is riding Highway 14 from Grangeville to Elk City. As an alternative, Highway 14 to Elk City could be added to the Nez Perce and Salmon-Challis National Forest ride described below, extending that route by only a few hours.

A ride to Elk City on Idaho Highway 14 proves the adage “the journey is the destination”. The population of Elk City, at just over 200 residents, won’t fill an average theater (as of 2021). But this scenic and remote road plunges deep into Nez Perce National Forest back country tracing the route Native Americans used to migrate to Bitterroot Montana.

Directions are simple. Take ID-13 east past Grangeville and then take the junction with ID-14 to Elk City. Elk City has a gas station and not much more. Plan to turn around and follow the same road back to Grangeville.

Day Rides Out of Lewiston
Lewiston is conveniently located in easy reach of some of Idaho and central Oregon’s best riding. Here are two exciting options. Each route starts in Lewiston and ends in Ontario Oregon. Add either one to a longer ride plan or link the two together to make a round trip. Either way, you won’t be disappointed.

Nez Perce and Salmon-Challis National Forests
This ride to the south takes most of the day, ending in Ontario for the night. The estimated ride time is roughly 4 hours, which means either a late start or enough extra time to add a roundtrip to Elk City on Highway 14.

Joseph and the Hells Canyon Scenic Byway
This ride, like the forest ride, takes all day and ends in Ontario Oregon. But then riders who took the forest route to Ontario should consider riding this route in reverse back to Lewiston.

The route twists and turns through mountain valleys and forests in the Wallowa-Whitman National Forest between Washington and Oregon on the way to Joseph. Past Joseph, the route picks up what is arguably the best segment of the Hells Canyon Scenic Byway (hellscanyonbyway.com). 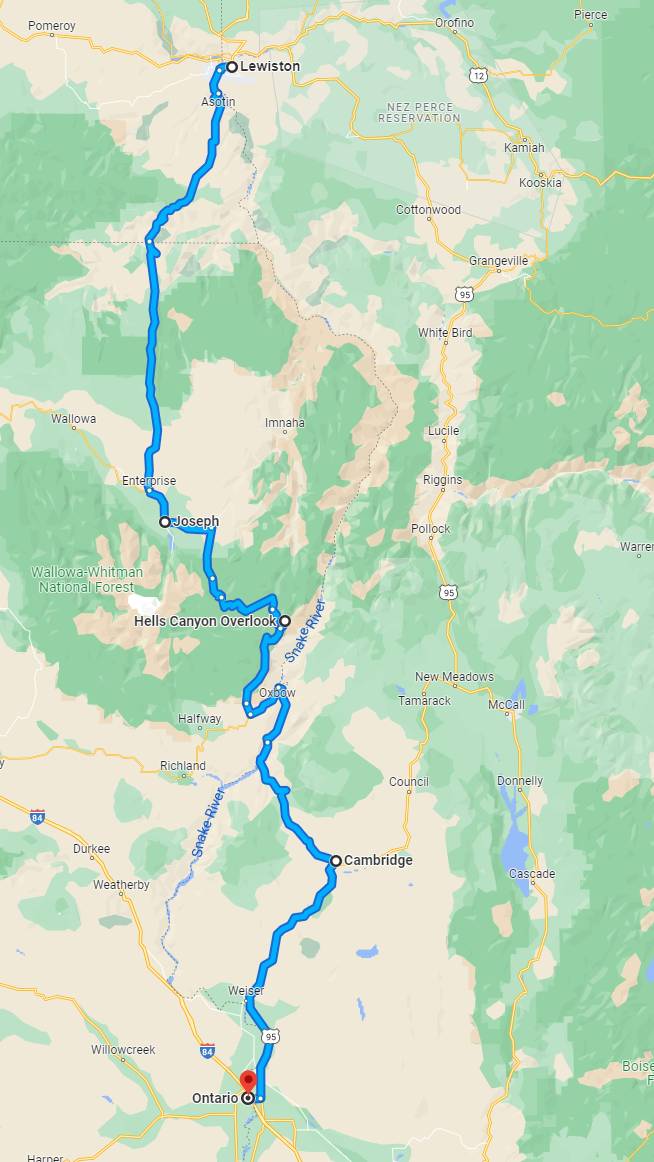 Joseph and Hells Canyon route map
Map data ©2022 Google. Lewiston to Ontario on the Hells Canyon Scenic Byway.
Head across the Snake River into Washington State from Lewiston and pick-up WA-129 southbound into Oregon where the highway becomes OR-3. Look for the Joseph Canyon Overlook about 12 miles into Oregon on OR-3. 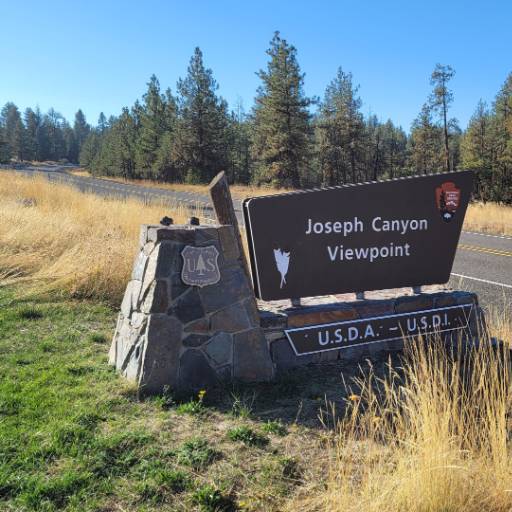 The Joseph Canyon Viewpoint off Oregon State Route 3 offers sweeping views into the 2,000 feet deep canyon below. Photo © American Sport Touring.
Turn onto OR-82 at Enterprise and continue to Joseph Oregon. Joseph is a mountain town located at an elevation of nearly 4200 feet on the eastern edge of the Wallowa-Whitman National Forest. This small town holds an annual rodeo each July during Chief Joseph days and a Bavarian themed Oktoberfest in September. 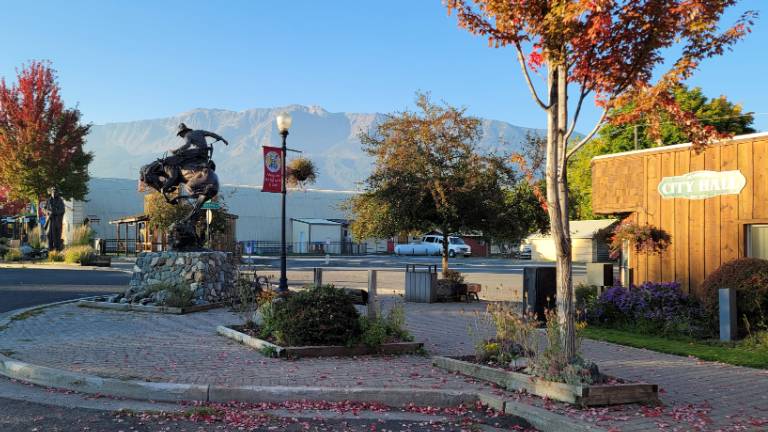 A statue on Main Street in Joseph Oregon celebrates cowboy heritage. Photo © American Sport Touring.
The best part of the Hells Canyon Scenic Byway for motorcycling lies between Joseph and the Snake River. The roads are as twisty as they get, the scenery is unspoiled, and views from Hells Canyon Overlook will stir the soul. That said, it’s worth experiencing the entire scenic byway if time permits. The byway is a full day ride by itself, looping from La Grande Oregon east toward the Snake River and then comes back around to Baker City Oregon. But if trade-offs must be made, then this segment between Joseph and OR-82 is the one to ride. 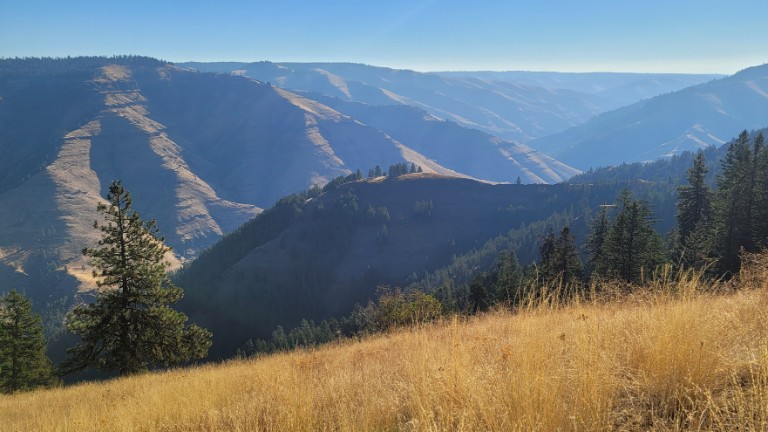 Joseph Canyon viewed from the overlook on Oregon State Route 3. Photo © American Sport Touring.
Ride east out of Joseph on OR-350 and then turn south on National Forest Road 39. FSR-39 is a paved summer road but with more than a few potholes. It closes for the winter in late November and reopens in early May depending on snow fall. Watch for the turn off to the Hells Canyon Overlook, you don’t want to miss it. The two-mile access road is paved, and the view is breathtaking.

Continue on FSR-39 to the junction with OR-86 where the ride turns east toward the Snake River. At the river, take Hells Canyon Road south to the Brownlee Dam, cross the river into Idaho, and continue south on ID-71. At Cambridge, turn on to US-95 to Ontario. 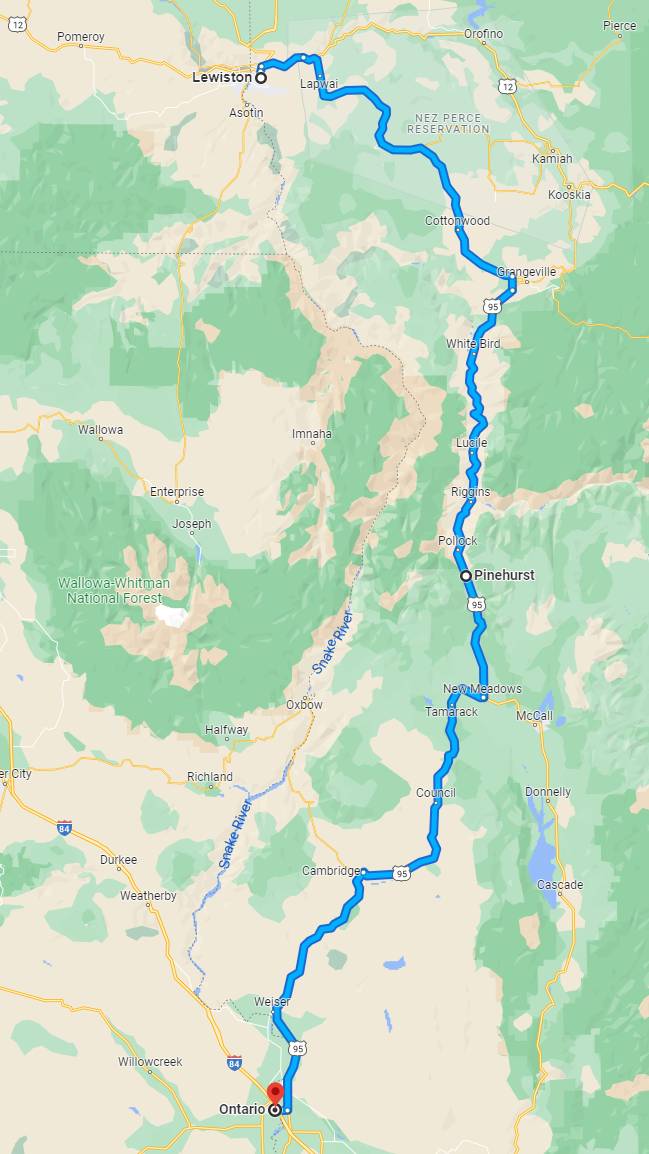 Don’t Overlook Lewiston
Lewiston Idaho doesn’t come up often as a destination for motorcycle rides and that’s a shame. The small but vibrant town is surrounded by diverse landscapes varying between wheat fields and forests, mountains, rivers, and canyons in all directions. Among all that scenery are some of the best motorcycle roads in the country. 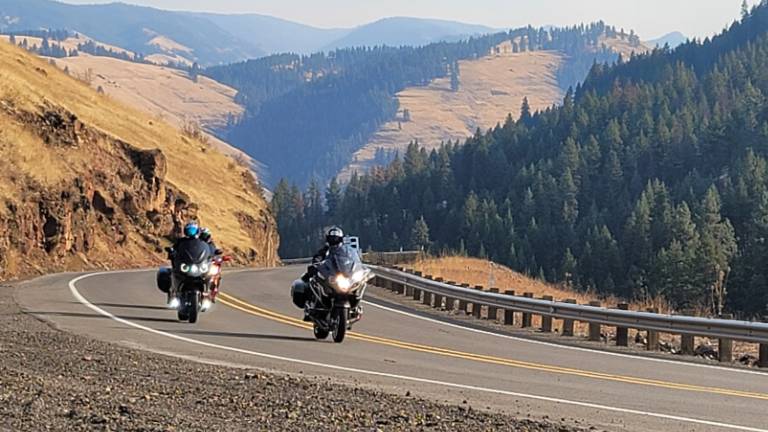 Winding in and out of mountain valleys on the Hells Canyon Scenic Byway heading toward Idaho. Photo © American Sport Touring.
Lewiston belongs on your list of riding destinations.